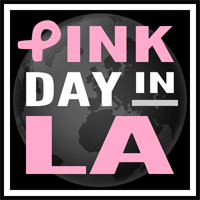 It is that wonderful time of year again when we gather together in-game and get in touch with our Pink Sides! (For a great cause!)

This time around we have a lot going on, so read on for more details!

What Is Pink Day in LA?[edit]

Pink Day in LA is a charity fundraising event, hosted within the game of Guild Wars 1 and Guild Wars 2, so come dressed to impress and share some pink love! The aim of the event is to raise support and awareness for breast cancer during the month of October (breast cancer awareness month). The event is currently supported and organised by the Gaming World Entertainment Network and Gamers Giving Back.

"On June 16th, 2007, the first Pink Day in LA took place in the international districts of Lion's Arch which was full of players in different armor sets all dyed a different shade of pink."

The first Pink Day in LA took place on June 16th 2007 and was followed up with an event in 2008. The original organisers could not commit to hosting the event in 2009. In 2010 GW-EN and Gamer's Giving Back revived the event and raised over $11,000 for the Canadian Cancer Society, surpassing the original goal of $1,337. This was only achieved due to the generosity, support, and awesomeness of the Guild Wars community.

The event has continued each year with the awesome support of the Guild Wars community and we are excited about the plans for Pink Day 2014. We are very proud to host the event again this year!

What happens during the event?[edit]

First and foremost, everyone wears pink!

In 2010, ArenaNet added the pink dye vendor Rosa Salvitas especially for the event, and appeared each year in the month of October. On April 14, 2013, the Pink Day dye trader was renamed Sadie to honor a long time supporter of Guild Wars community events who lost her battle with cancer. Sadie the Pink Dye trader will appear in Lions Arch at the beginning of October.

Listen to the event stream[1] and join the events in Lion's Arch. Details at Pink Day's website[2]

We will meet in the International district of Lion's Arch which is dedicated to this year's event!

We will have in-game trivia and catering for all those with a sweet tooth or a mighty thirst!

As always, for answering trivia correctly you can win a number of goodies from the game, including but not limited to:

Since GW 2 is so new and guesting has not be implemented yet, we have come up with a strategy to make sure that everyone can participate to the fullest. We really want people to be able to participate. So, we have a possible 9 servers that are prepared to be hosted for the actual in-game event. Details are as follows*

* Servers and Details are subject to change based on changes over the next month. (Thanks for your patience)

Hosted Servers = Megaservers 1 and 2 - search via LFG tool to find out which Megaservers we are on!

For a megaserver to be active for hosting for Pink Day in LA, they need a dedicated 10 volunteers to be trained for the in-game events that are to be carried out! Please email Rhonda (Malibu Barbie) at admin@gw-en.com if your guild, alliance, or website is interested in hosting a different server that is not listed above. Details are still being worked on, but 10 is the amount needed for the 6 hours of the event.

* The Crafting Competition will be open to all servers whether they are hosted or not as the results will be mailed to a GW-EN representative announced on air!

The prizes for these games will be given out as donation prizes, Twitter/Facebook Giveaways, and on-air prizes.

All donations go directly to the Canadian Cancer Society! To make a donation and to be in a raffle with a chance to win some exciting prizes, visit the official donation page.

Please include your IGN (In-Game Name) with your donation if you are contributing! This will be helpful for us when it comes to the prize drawing list. All people who donate will have a set of prizes that they have a chance to win for contributing!

What you need to do:

* Multiple donations of more than $10 are only counted as one entry for the raffle.

** If you donated to the team page rather than the Pink Day page, DON'T FRET. You can still e-mail a number in and it still goes to the Canadian Cancer Society!

This list is to be updated over the next few weeks as we are awaiting prize confirmations and working out details of GW2 in-game prizes! Updated Prize List at Pink Day Webiste[3]

Donation-only prizes are only available to people that have donated a minimum of $10 (CND) and follow the steps outlined on the donator's page. You will have up to 3 months after the event to collect and claim your prizes. If you fail to do so within that time period the prizes will be donated to another event.