I like how the actual shield's skin looks absolutely horrible when compared to the inventory icon. xD

With comments above ive found out that they didnt actualy finish this sheild, thier were suposed to be horns in those strange gaps(Like this inventory icon) and the sides of the shield were supposed to be 'puffy' like the milita sheild. More evidence on this is with the dye, This shield is Totaly tinted,insted of partly coloured,Like most armor.Therefor, Sloppy work 1 : 0 anet --Neil2250

Now that you mention it, the icon looks pretty badass....and the shield looks just terrible. I've always thought that some developer had food poisoning one day and threw up on his laptop. Then, of course, he thought "This is a great design for a shield!" Karate

Btw, it's definitely a bug. Emily said she would report it in 2007. Here's the quote: "Hi guys. I mentioned this to our items folks and was told that this is likely a bug. It will be passed onto the artists to check out. Thanks for the report :) --Image:UserEmilyDiehlStar.gif Emily Diehl (talk) 00:01, 11 December 2007 (UTC)"
So...yea...I guess the artists didn't give a rat's ass. Karate

Good idea. The developers probably won't see it, but players would probably like to know about the bug before buying the shield. --Irgendwer 14:14, 22 July 2010 (UTC)

Well initially it looked like this, but when I turned of the alpha channels It looked like the one in game :\. Seems like something went wrong when implementing the model ingame, and they were too lazy to fix it... -- Magamdy 18:31, 16 May 2011 (UTC)

Now that looks way better than wielding a leaf LOL– 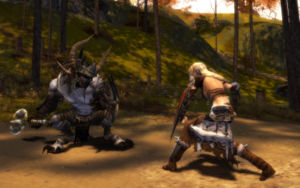 well, after almost 4 years it got updated. Seems like our cries werent unheared. :)