I tried, but it wouldnt let me tame them :(...whoever wrote this, are you sure theyre charmable?

That looks like the charmable green color in the screenshot to me, not the NPC green -elviondale (tahlk) 22:22, 3 September 2007 (UTC)

I'm the one who said they were charmable. However, I did not test it. I just saw they had the typical charmable green name text and assumed they could be charmed. I'll verify the non-charmable nature tonight. Sorry about the mishap. --Thervold 21:27, 4 September 2007 (UTC)
Yep, you were right. In spite of their attractive green labels, they are uncharmable. --Thervold 05:38, 5 September 2007 (UTC)

well if you ask me it looks the same like that moa bird in the Spreading the Wintersday Spirit quest tought then it was called Festive Moa--Elliot 18:45, 26 September 2007 (UTC)

Is there any reason why the Wintersday Moa cannot be tamed as a pet? It's nice that they are available to look at assuming you have done the appropriate quest, but it just seems strange that you can attack and kill them but you cannot use Charm Animal on them. They are only level 3, and there doesn't seem to be any difference in them and the normal Moa or Black Moa (aside from the slight change to the skin) so why not let people have them? Or is this just a bit of a teaser to what we can expect from this Wintersday event? Do you plan to have the Wintersday Moas around during this year's event, and allow them to be tamed then? I'm just curious why they made them if they were only going to stick three of them off to the side of one cave that requires a quest to be completed before you can enter. ~

Sorry about the extra posts, the site was being horribly laggy again and aparently when it did sumbit it went overboard. ~

theres also white moas and caribou which cant be tamed... they just decided they cant be tamed at this point. Mashav 08:19, 30 September 2007 (UTC)

White Moas can be charmed. - BeX

Yep, I just didn't mention them because I thought they had more than minor coloration changes from the base model, unlike the others... as I'm pretty sure the feathers were changed a little and such. Caribou I can understand because they've used the skin before for the Kidnapped Reindeer and such, but they've never had a tamable pet with that body type/size. Same with the Rabbits. The Moa however is already a tamable pet, so it seemed strange to not allow it to be tamed when it just has a slightly different skin, and other Moas with similar changes are tamable. ~

The designers have a limit on the number of tame-able pets in the game, for reasons of file size, download needs, and simple design decision. The Wintersday Moa is not a creature that they choose to offer as a pet at this time. According to the designers, while nothing is impossible, it is quite unlikely the creature will be turned into a tame-able pet in the future. -- Gaile

That doesn't male much sense. The skin is already in game; it's already been downloaded by the players, right? Sure, I guess if you don't have GW:EN and never do -image then maybe not, but most users will already have that skin, and the skin with it's slight variations from all the other current Moas can't take up much space... and since the Moas that all already tamable and all over the game all use the exact same attacks and movements, all that info has to already be in the players files... so given they already have all the data and the movement, and the skin is likely there too (or very small if not) then what's the problem? It surely isn't downloads and such like you're attempting to claim. Do you even know how this game works, or anything about pets? ;) ~

J.Kougar, you obviously have a superiority complex, otherwise you wouldn't assume to know more about the game, than someone who helps to bridge with the designers, she's only relaying info passed onto her by the designers, so this has nothing to do with what she knows. -

LOL, she thought she could shoot her own team mates when she plays, she thought she had to call targets for her pet to attack them (pre-pet controls) she has demonstrated on countless occasions that she doesn't know how things work in game, mechanic wise or whatnot, and she's known for giving excuses for things without consulting anyone first, just making up crap that she thinks sounds good and might convince anyone who doesn't have a clue, but gets her laughed at by anyone who actually knows anything about the game. She can't handle the stress of her position and constantly goes off on the customers on forums and the like, and she has no business in the position she's in given her lack of knowledge of the game. That's all old information though, and there have been more than enough discussions about her qualifications, or lack there of, just like with Izzy, so that really doesn't need to get started again. The point is, I think she made the excuse up off the top of her head, because it's so completely implausible and silly, that's what I was getting at. :) ~

"The designers have a limit on the number of tame-able pets in the game, for reasons of file size, download needs, and simple design decision. The Wintersday Moa is not a creature that they choose to offer as a pet at this time. According to the designers, while nothing is impossible, it is quite unlikely the creature will be turned into a tame-able pet in the future." - Gaile

Okay, what Gaile said may have been the case then, but just recently the Jingle Bear was added to the game as a new charmable animal. Would it really be too much to ask to make a few minor modifications to the Wintersday Moa and make it a new charmable pet as well? The Last Windseeker 21:56, 20 December 2008 (UTC)

and now the jingle moa {i much rather would have had the wintersday moa} so yea if there is a limit to the number of pets then how come they can keep adding them?AurenX 01:31, 21 December 2009 (UTC) 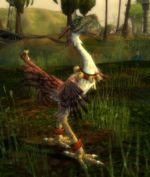 Wow...I just noticed that these were present before EotN released...Has to be a quest during the Wintersday 2006 in Elona: —Zerpha

It isn't an anomaly to have their profession showed on their target bar imo. After an update, every (non-tamable) NPC in an explorable area got a profession. It's just like the Moss Spiders in Pre being Rangers, and the Guild Lord being a Warrior. BlazeRick 20:25, 14 December 2007 (UTC)

Accidentally hit enter before finishing my comment. "Non-charmable" is already mentioned at the top. Does not need a second mention in the notes. de Kooning 19:19, 16 December 2009 (UTC)