Oberan the Reviled will ask you to kill 5 level 3 Crypt Fiends. They will come one at a time along the corridor. 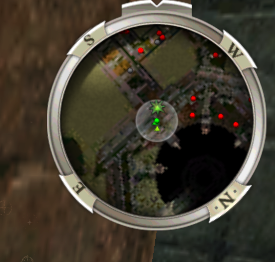 Oberan can be hard to find for new players. The quest Charr in the Catacombs from Prince Rurik will lead the player straight to Oberan. Karleen, the universal collector for foot armor pieces in pre-Searing (collecting Gargoyle Skulls), can also be found a short way to the north of Oberan.

This quest is pretty straightforward. The crypt fiends will spawn one at a time and come through the long hallway towards Oberan's location. The crypt fiends have no skill and attack at melee range with low damage output, so they are not difficult to defeat. Just kill all 5 and collect your reward.

Faintedheartedness is a very weak hex, and its main use is to trigger Soul Barbs' damage. Soul Barbs, on the other hand, is quite strong and works with all hexes, including Siphon Health and mesmer hexes such as Conjure Phantasm and Imaginary burden.

An easy way to accomplish this quest is to hide behind the wall behind Oberan (see picture). That way the Crypt Fiends will get stuck trying to reach you as they will be bodyblocked by Oberan. You will then be able to slowly kill them with ranged spells.

Oberan the Reviled
"Working here in the catacombs protects me from the prying eyes of the living, but my necromantic experiments have begun to attract the attention of creatures from beyond the pale. I'd like to continue my work without interruption by these infernal beasts"

"If you go south and eliminate the crypt fiends that have been bothering me, I will share with you a few of my most essential Curses. Then you too will see that the true power in the Necromancer's art lies not merely in the manipulation of the dead."

Accept: "Consider it a bargain."

Decline: "I'm not sure I can handle this."

Ask: "Don't squander the power I have placed at your fingertips! The crypt fiends are not far from here. The demons cannot help but be drawn to the dark forces I command."

Oberan the Reviled
"Excellent. I shall be glad to be rid of those fiends. You show promise in the art of necromancy."