Torches are bundle items used to light beacons which typically open gates in order to continue on in the mission or dungeon.

In Guild Wars Prophecies, these torches are used to light the Storm Beacons at the beginning of Borlis Pass.

When a lit torch is carried in the Eye of the North or the Bonus Mission Pack, the player will be endowed with skill effect Lit Torch, which has a duration. Once the duration of Lit Torch ends, the torch will will go out, requiring to be re-lit from an active Flame Brazier before it can be used. In these cases, the torch will either be called "Unlit Torch" or "Lit Torch" when dropped on the ground. 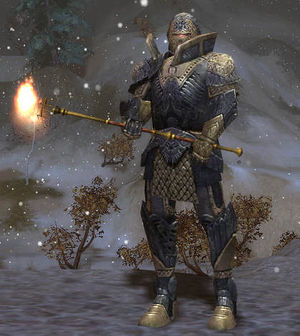 A torch held by a player

Bug.Sometimes you will pick up the torch backwards.