This page is an archive. The contents have been moved from another page for reference purposes only, and should be preserved in their current form. Discussion on this page is not current. Any additions you make will probably not be read. The current version of this page can be found at User_talk:Lacky.

To all players wishing to know how much taller Daniel is compared to a regular Elementalist at it's tallest height, here are some screenshots. 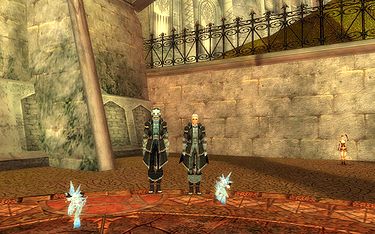 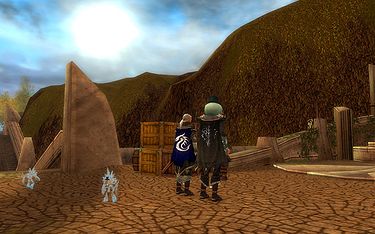 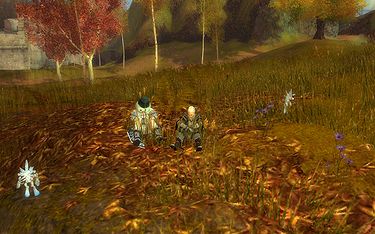 I'm just doing some last tasks that need to be done then I shall do it. --

Actually, I have read over the page and thought about it deeply, and I am not going to user merge. --

your page it's clean... must write alllllll over it ... can not resist that urge.... hahahahahhahahahahahaahahahaKelli

Oh don't tempt me my friend for i will write many long stories on your talk page. lolKelli

Sherlock Holmes and Dr. Watson go on a camping trip, set up their tent, and fall asleep. Some hours later, Holmes wakes his faithful friend.

'Watson, look up at the sky and tell me what you see.'

'What does that tell you?'

Holmes is silent for a moment, then speaks. 'Watson, you idiot, someone has stolen our tent. Kelli

LOL! Nice. That was quite an interesting read, my dear friend. I also enjoy you on Blade. =P --

I didn't break it. i was counting down to my birthday on your site. LOL Just Kidding wanted to see what would happen if i did a date far ahead. Kelli 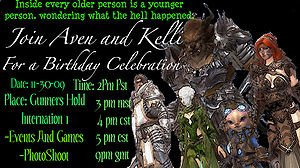 Aww! Thanks for inviting me! My first ever invitation to anything GWars related. Haha. =P
I would be delighted to come (if I can)! --

If you noticed, I did post with 1 account. This is my main account. My others are for other personal reasons. I rarely go on them, however they are needed and they do have a purpose. Besides, there is nothing saying I can't. --

Lacky 00:20, 29 November 2009 (UTC)
EDIT: Don't you also have more than one account? And merging accounts just merges the contributions and who edited the page etc. --

Also Lacky as long as your not voting on multiple accounts then there truly is nothing wrong with it. Drogo 00:25, 29 November 2009 (UTC)

Haha Drogo, nice one. And you're absolutely right. --

Wee bit bored can you tell?

At first I thought you had just changed your signature then I saw the actual different accounts of yours. =P --

Yep only ive got mine merged like what he was saying.

(Reset indent) I was actually commenting on the fact that you use and maintain multiple userspaces when you supposedly don't use the other- why not just redirect the other userspace and stop making unnecessary, duplicate edits? – Emmett 04:18, 29 November 2009 (UTC)

Because as I was saying, I keep them there for my own reasons. --

Sigh...fine. The reason why I have this account is because it's my main and first account created. I have Chris Malone account because it is my professional account (don't ask what I mean by that), and I have DJ Lacky account because it is the account I use for Blade Radio paraphernalia. Happy? May I inquire as to why you have your Shadowcrest account? --

I have Shadowcrest because that's the account I use almost everywhere else. However, I do not ever update SC's page(s)- which is what I was really getting at with this section. I don't really care that you have multiple accounts, I just fail to see a good reason to update more than one of them if you only contribute from this one. – Emmett 06:59, 29 November 2009 (UTC)

The reason why I posted the Daniel Frozenwind thing on Chris Malone talk page is because I was not sure which account Daniel would look at. He said to post them on either my account(s) or his, so to create a failsafe, I did on both. --

I still fail to see anything wrong with what he has done. There is no policy stating that you cannot have multiple accounts or that you have to merge them. This is starting to look more like harassment. He has and uses more than one account, accept it and move on.

I still fail to see where I pointed out a policy he'd violated or anything of the sort. I am asking, as a user without any threats of banning, for him to redirect his other accounts to this one because I'm not seeing the point of additional edits to other userspaces just so that it reflects this one- which, so far, nobody has really defended. If you have some logically sound reason why a redirect or transclusion wouldn't accomplish the same exact thing as updating multiple userspaces, I'd love to hear it- until then, I'd appreciate it if you didn't randomly accuse me of harassment. (In addition, I think you pretty much tl;dr'd this entire section before replying, because if you had actually read it I have stated more than once that the issue I am arguing about is not that he has more than 1 account.) – Emmett 16:06, 29 November 2009 (UTC)

(Reset indent) Perhaps you didnt notice but this convo only has 3 ppl in it. You, Lacky and me. So I have read the entire thing. I didnt accuse you of sysop abuse. I said you are harassing him. So there is no need to mention sysop tools. As a user you need to get over it. If he wants to do things his way let him. I am aware that you didnt point out any policies. I brought them up as a way of saying "and your point is?".

Using multiple accounts at the same time is confusing, especially if you're attempting to maintain their userpages/talk pages at the same time, too (which one do I contact? which talk will be seen first? which page has the most recent information/discussion?) - often to the point that it becomes disruptive. I have to agree with Emmett here; please stick to one account, and to one set of userpages. We've already gone through this before after your multiple accounts caused, yes, confusion and disruption. -- pling

What Pling just linked to has been resolved and those accounts all redirect to User:Chris Malone. Yes it was disruptive for a whole of 10 mins.

The thing is here...although all the comments have good and bad points, the ironic thing is we ALL have separate accounts, regardless of the fact whether or not they are redirected. --

Drogo Boffin 19:30, 29 November 2009 (UTC)
Once again, we are not asking you to close down your accounts or anything like that. We are asking you to stop updating the others userspaces. Everyone's alternate accounts have userspaces that redirect to their main- User:Shadowcrest, User:Drogo, User:Brains12 are all redirects. Nobody but you updates their alt accounts, and that is what we are asking you to stop doing. Everything you've been pointing out has nothing to do with the maintenance of alternate accounts- please stop bringing up matters other than that unless they actually make an argument. – Emmett 19:36, 29 November 2009 (UTC)

They do. The thing is, what's the point of account? Is it not to be able to post under a given name/alias? Now say, people are giving you crap about one thing or another, and you don't want to cause a riot or commotion, so what do you know? Sock accounts. They still give you homely feeling of an account but also let you keep the freedom of being able to edit without disruption. --

That's exactly my point! I maintain them because of the reason(s) stated above! And I hardly think that 2 or 3 edits every so often is counted as clogging up RC. --

Lacky 19:55, 29 November 2009 (UTC)
EDIT: Also, most of my "maintaining alt accounts" is actually just maintaining this one, which has been transcluded onto my other one(s) via a template. --

Great reflexes. What was it? 4 seconds? Titani

Heh, I thought it was alright myself actually, although I thought someone might have beaten me to it. But yes, a couple of seconds sounds about right...just in the right place at the right time really (my watchlist). --

When I get back, I'll give you the award you deserve. Titani

Thanks? Heh. I also notice you posted about it on the admin noticeboard. I tried to but my firefox seemed to malfunction when I pressed submit. --

You win the great reflexes award! Your prize: A template you can show off with! You must be bursting with pride! Titani

Oh thank you so much! Is is just {{User:Titani_Ertan/Great_Reflexes_Award}} or what?? --

*gives you 1.00 dollar in an oversized check* Titani 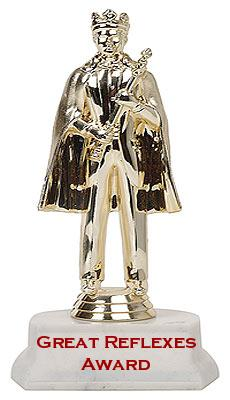 Well you have to overcome your fears... --

Change anything you want. Titani

The only thing I might possibly change is the colours. They seem a bit daunting. However never the less, thanks. =P --

Just a note, when tagging comments as unsigned, be sure to subst it. I.E. {{subst:unsigned|<name here/>}} It will replace the template with the contents of the template, E.G. --The preceding unsigned comment was added by User:Jon Lupen (talk).. Keeps pages clean of as many templates as possible. I heard bad things happen to pages with too many templates. — Jon

Ahh ok. Thanks for the tip. I know what Subst: does just didn't know I should use it for unsigned. Thank you Lupen. --

We have a bot that moves the inactive guilds to historical. No need to move individual guilds like that. --

I know, it's just that it hasn't been run in a while I don't think. Also one of them was my old previous guilds. --

You could ask poke when wikichu runs to do the historical moves. --

Huh whatcha doin? I was gonna wait another day before archiving that stuff since it can still be concidered ongoing convo.

Eh, as I said, you seemed to be having some trouble. Plus those convos seemed finished to me? --