This page is an archive of bugs reported by players. These issues were submitted under the Feedback licensing terms and have been moved from their source page for reference purposes only. They should be preserved in their current form; any edits made to this page (outside of maitenance) will be reverted.

To report an existing bug, visit the official Support website.

There was no status report from QA on whether these issues have been resolved prior to archiving. In some cases, this was because ANet was awaiting further details from players.

http://img688.imageshack.us/img688/1342/warriorancientarmorclip.jpg
Issue: Shoulder clipping issues because shoulder piece is out of place. Has clipping issues with cape.
How to fix: Correct clipping errors.
Additional info: Left shoulder is worse then right shoulder.

<IMAGE(May be external>
Issue: Dark Glitch/Patch/Hole on Leggings at the front
How to fix: Take it out / redraw?
Additional info: It's been there since the armour out and it can't be intentional 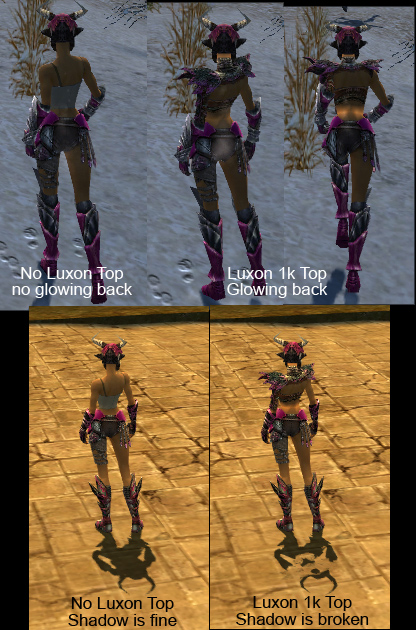 Issue: Bad Graphic, Poorly Made.
How to fix: Find the parts of the mesh that weren't joined right?
Additional info: The lower back on females glows when wearing the top and is very easy to see in foggy areas, also you can look at the shadow cast by a female with this top on and see that the top part of the shadow isn't there / is messed up. I believe this is a messed up mesh that wasn't closed/joined properly.
I've decided to report these here in hopes that this time around the report will actually do something, though after years of nothing having been done on these bugs that I reported back then I've lost a bit of hope on fixes. :/ Imaginos 18:50, 18 June 2010 (UTC)

http://img39.imageshack.us/g/gw006r.jpg/
Issue: Using black dye on the pants will give a dark purple/blue color.
How to fix: Give them the same color code as ex. Obsidian Vestments Female, dyed black gives a pure black color.
Additional info: I tested on the pants and Gilded Vestments dyed black. Vestments would give a color silver/black-ish. I haven't tested on other parts from the sets but I can imagine they work the same way.

N/A
Issue: When switching to LOD1 (base index 0) of Disciple's Krytan Vestments (chest), some visual artifacts appear on the right shoulder.
How to fix: Rework the model.
Additional info: N/A 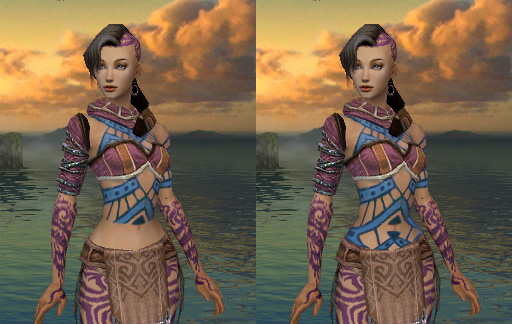 Issue: Artist Shortcut / Incomplete Armor art
How to fix: Fix Armor art file by completing the design along the whole body part (torso)
Additional info: The Luxon top seen below doesn't fully reach down to the hips. This was a shortcut by an artist. Have an artist go back in and finish the art properly :).

none
Issue: sections of the armour disappear underwater
How to fix: i dont know
Additional info: none

Common Armor: Necromancer with Bandana and a certain harstyle

http://img197.imageshack.us/img197/7559/heheedgeloopmestakemygu.jpg
Issue: Seems like someone got nervus before final release and by accident selected the edge loop on her waist and pulled it up.
How to fix: Select the edge loop and bring it down. Think there may be some UVW un-wraping needed afterwards.
Additional info: It's been like this since the armor was introduced to the game. It's just a problem that really grabs your attention and doesn't allow you to pull away from it once you know its there!

This is a reskin of File:Mesmer Elite Noble armor f.jpg, and is part of the model's design, not a "bug."

Media:tintedspecbug.jpg
Issue: On a particular Mesmer face, one of the lenses is tinted and one is not from certain angles
How to fix: Make both lenses tinted
Additional info: I believe it may have something to do with the fact that some of the hair is in the same place as the lens

This is because both the hair and the lens are transparent. The GW1 graphical engine has never handled overlapping transparencies correctly.

Issue: The Mesmer version of the gauntlets did not get the "icy" texture, and is just a polygon shape on both Male and Female.
How to fix: Apply the same textures that were used on the other professions' Glacial Gauntlets.
Additional info:

http://wiki.guildwars.com/wiki/Gallery_of_female_mesmer_Primeval_armor
Issue: Artist Shortcut / Incomplete Armor art
How to fix: Fix Armor art file by completing the design along the whole body part (legs)
Additional info: The Mesmer stockings on primeval armor don't reach below the knees, unlike every other mesmer stocking art. This was a shortcut by an artist. Have an artist go back in and finish the art properly :). You can check all the other mesmer stocking armor and see that they all fully cover the legs.

Issue: Long hair clips with the top part of the male robe
How to fix: make the hair appear under and not through the robe
Additional info: None

http://i51.tinypic.com/2u61ovs.jpg
Issue: the bracelet on right hand, which is a part of the attire of other female classes, is missing only on female elementalists. Also, there's a hole on character's back near the dress strap, as the image shows.
How to fix: Patch the hole on the back, complete the jewelery set :)
Additional info: none

http://img156.imageshack.us/i/gw042ff2.jpg/
Issue: the top left (facing character) portion of the mask clips the long bangs male hairstyle
How to fix: Correct clipping errors
Additional info: Does not clip unless used with other obsidian pieces. ex: full ancient+ mask = no clip

http://wiki.guildwars.com/wiki/File:User_SetandSpike_Male_Ritualist_Ancient_Armor_Glitch.jpg
Issue: The top-most strap across the back clips into the character's body when moving.
How to fix: Adjust the strap so that it doesn't protrude through the character, possibly moving it outward/away from the body.
Additional info: Issue happens regardless of movement speed. Screenshot taken while moving at normal speed, not very apparent when the armor color resembles skintone.

http://img241.imageshack.us/img241/4239/gw004.jpg
Issue: There are portions of the helm (specifically the front) which are permanently red and should be dye-able, but aren't.
How to fix: Make that area dye-able much like the non-elite version so that different color choices besides red are viable.
Additional info: Being forced to have a red helm is annoying :/ You must either wear all-red armor or have a non-matching helm. 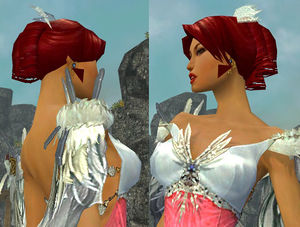 Issue: When Formal Headpiece is worn with Dwayna's Regalia gown by a female Ritualist, two triangles appear on the cheeks, and dye along with the head piece. I tested this with a female of all 10 professions, and this issue appears only on my Ritualist.
How to fix: Remove the triangles from whichever model has them.
Additional info: The triangles go away when changing out either of the costume pieces, they only appear when the two are worn together. In case this is somehow relevant, my Ritualist's default appearance is: hair style 4, hair color 3, face 7, skin color 3. However, the triangles did not go away when changing my appearance in the preview from Anatomical Engineer Llye. The triangles seem to be "anchored" to the neck rather than the face, because they move along with the neck and clip in and out of the face when performing emotes.

Media:User chronicinability Paragon Vabbian Sandals glitch.jpg
Issue: The Toes on the Sandals has minor clippings/keeps Flashing, hard to see if its not animated.
How to fix: Correct clipping errors, and put it back If you can thanks.
Additional info: Happened Today July 14, 2010

Armor: Mask of the Mo Zing

Issue: My beard clips trough the mask
How to fix: Dunno, just fix it
Additional info:

Issue: When looking at it at front/side ways you can see through it its missing a piece at a point, the piece behind its arms
How to fix: Make it visible? ~~
Additional info:

Issue: In the farest camera, female characters' legs would cut out the skirt when moving. And while paragon dancing, her back lower waist become invisible.
How to fix:
Additional info:

Image 1, Image 2
Issue: Despite the player putting setting on Do Not Hide, or Show (Except PvP), the Item still shows over the top of the actual armour head piece (in PvP areas).
How to fix: Possibly change the way the Festival hats work/are equipped?
Additional info: It sometimes even shows the Festival hat piece when you log out of your character in a PvP area (such as the Zaishen Elite Outpost)/are logged out of your character and are on the character select screen. It also (correctly) shows that you are wearing your armour head piece in your inventory window, even when it shows your festival hat in-game.

Issue: On the males who squat when sitting (ranger, assassin, etc.), the green cloth below the waist clips right through the legs and knife while sitting.
How to fix: Maybe animate it the same way as the ranger's trench coats?
Additional info: None

http://s5.directupload.net/images/101231/tylqb35v.jpg
Issue: Female Paragon has no underwear
How to fix: Correct the seat of the pants!
Additional info: Image of the Login Sreen

Issue: Vabbian Leggings dissapear when in water or behind bushes
How to fix: Stop it dissapearing
Additional info: None

This is due to how transparent textures are handled by the game engine. Cannot be easily fixed.

Issue: White artifacts appear around the edges of EOTN armor and all costumes when anti-aliasing is enabled.
How to fix: The problem resides within the engine, not player-side. Figure something out
Additional info: Outstanding since 2008 http://wiki.guildwars.com/wiki/ArenaNet_talk:Armor_art_bugs#Anti-Aliasing_Armor_Bug