DARK has now change its direction to High-end PvE / Speed Clears we are looking for capble members for UW/FoW/DoA and much more DARK has been around for over 6 years so we like to make sure we put 100% of are efforts in to everything and everyone.

Was the first Luxon DARK guild to be formed. We were originally a Guild Called Terror Of Shadows [ToS] but later changed to [DARK] The First Day DARK was made we reached 1Million Factions and joined SpL alliance. From there we went to the Aurios Mines Alliance and 5 weeks later we joined the Cavalon Alliance for a period lasting 2 Weeks. We then made the decision to leave the Cavalon Alliance becaue of the rules of Alliance Chat (which were far too constricting for our members) and amount the of other stuff that detracted from our enjoyment of te game. We then joined BGW on there crusade for Cavalon. We helped to take Cavalon With BGW when Jaypac got banned from Guild Wars unfortunately we only held for 2 two days. A year went past and we started up a aliiance with MKOD which owned Zos Shivros Channel for a short amount of time. As most of our members and officers had rank 12 Luxon we went Kurzick and within the first week of being Kurzick we were invited to the House Zu Heltzer Alliance as we were holding 4million factions, eventually we returned to the Luxon side and after a few reincarnations we are back as 'The Enternal Darkness' [DARK] and are here to claim what is ours.

The Enternal Darkness have always complimented their strength with a love for fun and team activities:

Guild-wide celebrations of the festive events.

more on the way :D 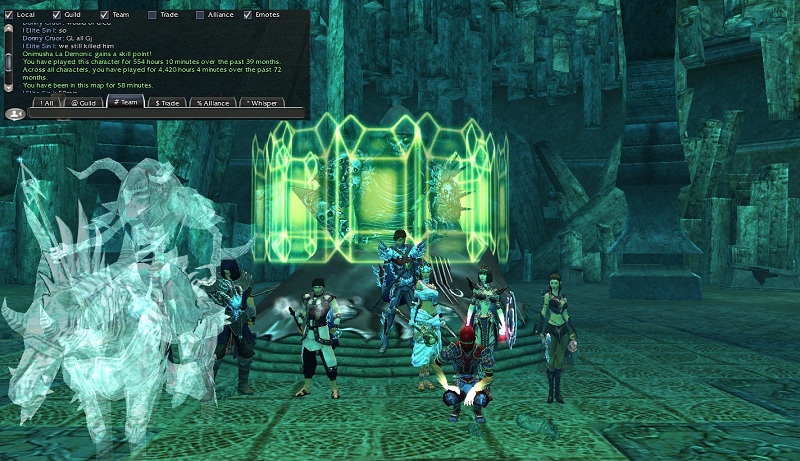