Disagreed! this isn't just a "cloud looks like a turtle!" it is quite clearly what it looks like, a heart with two sets of in intials. a nice little easter egg if your into that sort of thing. not sure it shoud have landmark status tho. pic to come. Kraal Fardale 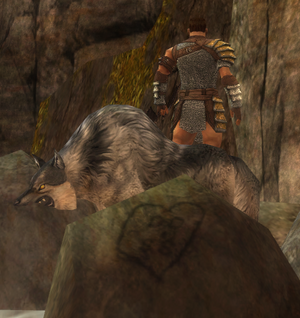 One of the programmers or designers working on Prophecies got married during development and this was included as a memento. --

The Rogue Bull is there before the Mesmer's Burden quest, also. So it's before the quest and during... however if the quest is active and you kill the bull, no matter how much you rezone the Rogue Bull won't respawn until you abandon the quest. So before and kind of during. I'd edit the page and say something to this effect, but putting it eloquently (and succinctly) is beyond me at the moment. --Nkuvu 00:32, 4 June 2007 (UTC)

Meaning, that the other person responds to them. But they're never displayed. Backsword 00:50, 10 February 2008 (UTC)

Is it that they don't exist or that Verata just doesn't like to talk? the emotes seem almost self explanitory Tearh 01:29, 27 April 2009 (UTC)

There are a number of official landmarks designated for Lakeside County:

However, I think a few more could be added:

There a few others that might have names as well.  The chambers and passageways of Devourer cave, the tunnel and open area off Ashford Mill pond, the various accessible islands, various hills, mountains, cliffs, waterfalls, cascades, shallows, deep water areas, and so on. --mtew 13:08, 30 April 2009 (UTC)

I find this a bit of an overkill. There's no need to give every single road it's own name, and the same goes for insignificant ponds and rivers. -- BlackHoleSun 15:29, 20 May 2009 (UTC)

Stop and think. Most roads have a name so people can give directions easily. Same for other features. In fact, the list is a bit sparse. I didn't mention house or other building names for example. The main thing is that the names be shared. Besides, it is fun to think up easily recognizable names for things. I am NOT suggesting that any of these places be given their own page! The only real problem might be if ArenaNet objects. --mtew 18:15, 20 May 2009 (UTC)

I think people are just fine without these names so dont add them and yes it is so much overkill its like killing all the enemies in a war single handedly and then killing all the people on your side. - Giant Nuker 13:34, 11 August 2009 (UTC)

anyone else seen the rit looking spirit in the graveyard?[edit]

This news is 4 years old. ~Shard

Go into Lakeside County and look through the fence near the statue of Dwayna, It isn't targetable. - Giant Nuker 15:47, 5 December 2010 (UTC)

Anyone know why it's there or when it was first added? I don't remember seeing those kinds of ghosts in anything else that was released before factions, it's normally the blue human model, but I didn't get to play before Factions was released so I don't know if this ghost was in the game before then, or when it was added. It'd be good to have some mention of it in the article since for anyone familiar with GW it definately stands out as unusual. 86.147.151.141 22:08, 16 April 2012 (UTC)