Erm... when I did this quest, the game tried to shut down my computer. Others said it did so as well. And then Molotov disappeared. And then my heroes just kind of ran off. I swear, this zone hates me. --Gah

He's pretty much just right next to Horai Wingshielder, so just look at that map. --Gah

'I'm pretty sure this isn't a bug for the quest either...i thinik he was like that yesterday aswell come to think of it Then again if he was bugged then this wouldnt be the quests fault--Smithyben 21:30, 24 April 2009 (UTC)

He is right inside the edge of the woods with the mantid right past a res shrine.

I got pop-up spawns and the message "Defeat Molotov Rocktail!" at the place where he usually spawns, but he wasn't there. Paddymew 05:46, 25 April 2009 (UTC)

He wasnt there because with this quest he is either bugged to where he is in the woods or was put there.

He spawns in the woods and then after you agro him he returns to his normal spawn point. -- Salome

Easy to do with Pain Inverter[edit]

Get a bunch of henches/heroes, eventually a minion master with some minions, flag them to get aggro from Molotov and cast Pain Inverter on it. Party wipe except me (I ran away), but he killed himself. Easiest quest so far. --Se7en 01:45, 25 April 2009 (UTC)

now that im doing this quest i notice that mantid resurrect automaticly sometimes, even when the group is dead InfestedHydralisk 17:41, 8 August 2009 (UTC)

Does Rocktail need to have a separate walkthrough on his (her?) bounty page? (I would think this increases the chance that the two pages grow out of sync.)   — Tennessee Ernie Ford (TEF) 01:15, 27 August 2009 (UTC)

Just killed him in HM with this simple build:

Clearly you have to avoid Mantids and Charrs, which is the only matter (see DP). Death's Charge lets you bypass Devourer Siege. 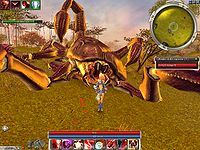 Is mousing over too difficult for you, Ernie?--

Just get in the nearby siege devourer and grab a team of heroes/henchmen that isn't completely herptarded and you pretty much automatically win. Pjwned 05:34, 31 May 2011 (UTC)

I just noticed that there is a big similarity in his name to Molotov Cocktail. Perhaps some trivia? Kycoo 15:02, April 25 2012

It is a note on the monsters Page