The Frog seems to never talk anymore. Gaile would speak with him, now I rarely see him at all. Anyone else miss The Frog? I met him (and he answered a question of mine) far before I met Gaile. He must return! File:Esig2.jpg Eldin 18:22, 25 August 2007 (UTC)

I think Gaile controlled the frog. It's not listed here, but I recall it became clear after a "fiasco" involving Gaile talking to herself with the frog, when she typed the wrong message into the wrong chat.Miss Innocent 04:46, 15 February 2009 (UTC)

Haven't seen any froglogs in a while... is the frog dead? --

Hes been wearing the same hat since last Halloween, so he must be =( *bow head* Blah Your Hamster

The hat thing is a little unusual, but the fact is, we couldn't pry the "festive chapeau" (as he calls it) out of his little webbed feet. ;) This year he wore it over to Lion's Arch -- his birthplace -- for the Halloween Festival. In fact, I think Froggie was around at Halloween a few times this year. The holidays always seem to bring him out... maybe it's the ale. ;) -- Gaile

Actually, I believe that The Frog got a bit of a face-lift, with improved texturing in addition to my favourite of all holiday hats, the witch's hat. I'll give him a good look next time. Usually when I speak with him I don't get right down and check out his wrinkly, spotted, but never-warty (says he) complexion. But I'll take a peek sometime soon and see if what I suspect is indeed the case, that he's not just The Frog, he's a New, Graphically Improved Frog. :) -- Gaile

Any idea where and what times The Frog might pop up during Halloween this year? If you've spotted The Frog, where and when was it?

I didn't see this during the festival, so sorry! Froggie is very fond of Lion's Arch, and I've noticed that's the place he usually chooses, when there is are festivals in multiple districts. This year he may have been in Kamadan once, but I think he was in LA a couple of times. -- Gaile

How can you talk to the frog?[edit]

I really want to talk to it. But idk how i can. please help, i never seen the frog before only the heket. lol

SAME HERE! were you part of our group talking about making frogs legs out of him? yummm...but I'm a vegetarian :D--The preceding unsigned comment was added by User:68.35.88.45 (talk).

Gaile claims not to be the frog, yet Gaile and the frog had a farewell party together. So is Gaile really the frog after all, or is/was it User:Andrew Patrick who is also leaving from CR? He does have a very green user page. :P -- Peej 04:10, 8 April 2008 (UTC)

Oh I always just assumed the frog was Andrew, however that would mean that Gaile has been given a mini Andrew which would be a tad odd, as that would mean Andrew would need a mini Gaile for balance. -- Salome

The dialogue from the Farewell Party is partially quoted on this page. The remainder was moved. Where? And why? Thank you. -- Gaile

That's very helpful, thank you. I will link to that from the Article, then. -- Gaile

There may be other frogs; there is only one Frog. :) -- Gaile

Ahh, so you have one of The Frog's cousins in your guild hall, very nice! Not everyone does, you know. Sometimes the residents of the GH are just generic amphibians, but I remember meeting Humphrey at a TPN meeting last year and he's a real nice guy. Er... frog, I mean. :) -- Gaile

Do you all remember "Hip Hop Routine"? You know, the awesome song The Frog and The Rabbit preformed during the "Farwel to GAile event"?

Well, I sure remember it... it is truly a masterpiece.

However... just recently, I started to wonder... who was the best rapper in the song? The Frog? Or The Rabbit? Maybe there is no "true" answer to that question, but you can always ask paople what they think...

Now it's time for people out there, to make their voice heard! Is The Frog, or The Rabbit, the best rapper? How to vote? Well... of course I thoght of that...

You vote using THESE USERBOXES!!! :OO

Everyone, post YOUR favourite on YOUR wikipage, and help decide wich little critter is the best at rapping! 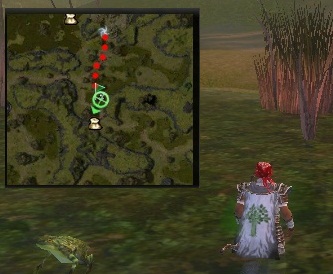 Sorry I Didn't sign..it was me, just wondered about this. I haven't seen him before and maybe hes not new. --Smithy-Star

That is a rather interesting piece of trivia - a note on The Black Curtain page is probably worthy, and maybe one here.

There are random frogs all around Kryta, and always have been. :\ –~=Ϛρѧякγ

Apparently not quite all over, see The Frog, @GuildWiki (includes ambient location in The Black Curtain). — Tennessee Ernie Ford (TEF) 01:03, 5 May 2011 (UTC)