From Guild Wars Wiki
< User:Infinite
Jump to navigationJump to search

Be prepared to relive Guild Wars like you've never relived it before, with the original Nostalgia challenge! This challenge is for Guild Wars players who no longer feel challenged or motivated to enjoy Guild Wars, yet look for a way to make things interesting anew. Do you have what it takes to take on the game with some serious comfort restrictions that might make you feel more of a newbie than you thought you could feel?

It is important that, for the whole of this challenge, all of the following rules are understood and adhered to. If things are getting too difficult or too easy (it won't be the latter, really), you are free to change some rules for your challenge personally. As long as you don't edit these rules to match your own, you can make it more or less challenging as you see fit.

This challenge can be done with up to 8 players at a time, but with any amount of players present that is larger than 4, the party must be split up into groups (all groups will be in the "same" area at any time throughout this challenge, excluding side-quests). This is due to the limitations in party size in the earlier parts of each campaign. The challenge has been designed for 4 players and is heavily based on that, but variations can be applied:

As the challenge starts in Prophecies, only the original 6 professions are accessible. Choose your primary profession well: you're going to be stuck with it for quite a long time. And you're (likely) the only one of that profession in your challenge, so the pressure's on!

Although not present in the original Nostalgia challenge, some amount of participants allow for heroes and henchmen use. We all know that these units allow for a massive boost in team performance in regular gameplay, but in this challenge your hero might as well have been just another player!

Just when you thought the restrictions were getting ridiculous, in rolls another one! Travelling is emulated as realistic in this challenge. No more click to travel, no more runners, no more of any form of comfort!

Not even your skills are spared by all the restrictions, time to cut out any leeway you still had. Back to basics, baby!

Some additional rules that would not fit their own section as of right now. Still important and further complicating things!

Completing any, or maybe even all of these tasks are extremely commendable achievements. If you can do these, you can truly claim yourself to be a professional, veteran Guild Wars (PvE) player, if not the best player of all time. 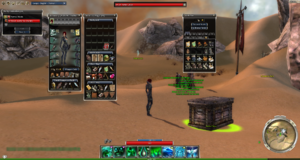 A example character for this challenge (part of a 4-man team).
Retrieved from "https://wiki.guildwars.com/index.php?title=User:Infinite/Nostalgia&oldid=2612089"