Welcome to my humble abode... and greetings from France. :)

What much to say, I have played this game and all the extensions a lot of time... since many years now : actually since beta in 2004 when I was interested but not swayed, then completely caught me in 2005 till now. I do speak and write french (native language after all), fluent english (correctly most of the time) and a little of german.

I have been active on the previous wiki, before it became official, not much on this one (irl matters as we used to say). Sometimes I post some suggestions in my feedback channel.

Some characters I roleplayed for an entire campaign : Shakni Zendergrim (Prophecies) and Daemon Wildhawk (Nightfall) namely, but one I played through everything I fancied (except grind) and every game mode (Polymock ftw!). 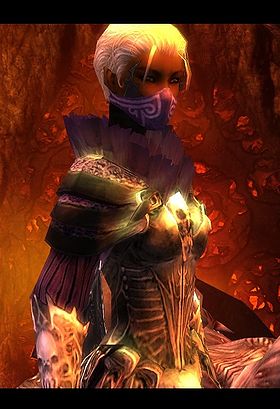 Daemons League was founded in April 2005 by Shakni Zendergrim, friends and fellow players, it is now an unused shell waiting for a second breath of life.

We are not recruiting.

And since there are new great creative folks around (kinda self explanatory when you'll see the love they put in their user pages) :