Wintersday Cards are hand-signed cards sent out, in real-life, to selected players by the ArenaNet development team. These cards have been sent each year from 2006 during the Wintersday period.

The selection criteria for who obtains the cards is secret, but the distribution is not random. Recipients live around the world, and are known to include Guild Wars Wiki users and staff from various fansites.

In order to send these cards out to the intended recipients, on rare occasion an email may be sent to a player to ask if they would like to receive a card, and if so, to request a preferred mailing address. Gaile Gray says "This whole thing is done, of course, in total respect for the Privacy Policy, and we're not signing anyone up for bulk emails or putting their name in the hat for the fruit-of-the-month club drawing."

The 2006 card was designed by ArenaNet graphic artist AJ Thompson based on high-res renders produced by the NCsoft art team. In 2006, every card was signed by ArenaNet co-founders Mike O'Brien and Jeff Strain, by Community Relations Manager Gaile Gray, and by a variety of members of the development team. The cards were hand numbered in silver ink, and totaled 1,000 cards.

The 2007 card was designed by AJ Thompson using an original piece of Charr art created by ArenaNet artist Katy Hargrove. The art was designed expressly for the card. Each card was signed by the three ArenaNet co-founders (Mike O'Brien, Jeff Strain, and Patrick Wyatt), by Gaile Gray, and by a variety of members of the development team. On most cards, the signature of a member of each of the various internal Guild Wars teams -- for instance, art, programming, content, design -- was included, which means that each card represents a heartfelt greeting from all the teams that make up the Guild Wars Team. The 2007 cards were hand-numbered in gold ink, and totaled 1,300 cards. 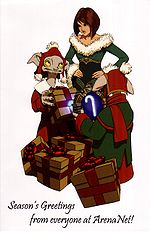 The 2008 card featured Gwen and some Asura sharing gifts, with art by Kristen Perry.

The 2009 card featured Nicholas the Traveller and Professor Yakkington drawn by Katy Hargrove. Each card recipient also received a random art print of Guild Wars concept art. The development of the image used in in the card can be seen in this blog entry from Katy. 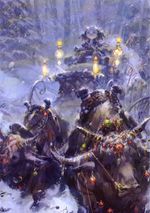 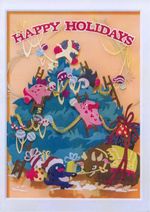 The 2015 card featured Bloomanoo, Peneloopee and family with art by Jamie Ro.