Regardless, that's stupid. Not everyone uses Tormented and Destroyer weapons, nor can everyone afford them. These weapons go with the lore and are relatively easy to get. And look good. Our HoM is supposed to be special and unique to our characters yet we can't add the weapons we want and the ones we use. I don't see anyone using Tormented or Destroyer weapons to be honest; they only bought them to fill out their HoM. All weapons should be able to be added, and these especially because they go with the lore and are part of an event bridging the two games. Tender Wolf

I agree with Tender Wolf on its stupid. I actually do see people using Destroyer wand/focus sets and Tormented Staffs and Shields - but the Destroyer more often than not was just to fill the HoM and the Tormented because those are the only two skins in that set that look good. And still most people I know don't consider it a worthwhile effort to fill the Valor monument. These weapons take more effort to get than Destroyer, assuming you just buy the mats like everyone else. Yea, they're cheaper to acquire (you gain gold doing the quests over forking out about 15-20k for mats), but so what? Tormented weapons take to the point of farming DoA which turns out far more gold, and it shouldn't be about what you spend acquiring them in the first place. The Valor monument seriously needs more options, of things that people actually use, and these would be rather suitable for that in acquisition and actually looking good so people want them. Lillium 21:44, 10 July 2010 (UTC)

Well i also agree that this should be included to the hall of monuments but as Konig already said they aren't adding any more stuff, my guess is because it takes time and effort to create the bonuses in GW2 and that's time and effort that they really haven't got since the game has been delayed a couple times already. "things that people actually use" and how many of those are part of a set and considered a achievement?
@Tender Wolf "Not everyone uses Tormented and Destroyer weapons, nor can everyone afford them. These weapons go with the lore and are relatively easy to get. And look good. Our HoM is supposed to be special and unique to our characters yet we can't add the weapons we want and the ones we use. I don't see anyone using Tormented or Destroyer weapons to be honest; they only bought them to fill out their HoM. All weapons should be able to be added, and these especially because they go with the lore and are part of an event bridging the two games." Your kind of missing the idea behind the hall of monuments, its there to show your achievements in GW and to transfer them into GW2 not for the junk you picked up along the way.--Azreal of Skyrim

These should definetely be added to the hall of monuments. The hall of monuments should have more choices than 2 sets. What about all the green weapons in the game? Why can't these be added to the hall of monuments? It isn't like they are super easy to get and they signify an achievement. There should be a seperate room in the HOM that I could store and collect all my green weapons or at the very least put some new tabs on the xunlai chest kinda like the materials page. There should also be a place for all mini-pets, everlasting tonics and fireworks...basically all of the rarest and hardest things in the game. Why do they have soo many things in this game to collect and soo little storage space? Dont they realize this just make people waste charater slots and account simply to use as storage? Is that what they want 20+ characters and 10+ accounts just as mules? I feel I SHOULD be able to do everything with just one character but in this game its impossible. Give the people what they want! After all it is just a game they can program whatever they want. I am really anxious to find out what benefits are given in GW2 throught the HOM. I hope it isnt garbage like just titles or like the worthless fire imp ally that stops working at level 20. People are holding to their stuff awaiting the news to see if they are gonna sell it or dedicate it. I hope it is good!Cinnamongod 07:59, 29 July 2010 (UTC)

To expand the level of coverage of items and such, would anyone be interested in starting a project to create .gif files or movie files fully displaying the animated effects of items such as these, or Dhuum's reaper, etc? There is a project going on to do it for skills, and a couple items already have videos showing the animation. Some items have more detail to their effects that can't be shown in a still image (such as smoke trails, the brighter fins on Silverwing bows as you're about to fire, etc) Ƹ̵̡Ӝ̵̨̄Ʒ аІiсә

Well depending on how far you want to stretch your morals, you can just download Adobe Photoshop+Imageready, or whatever it's called, for free. I've never used another gif program. However it might be better than using Adobe because we're trying to capture every frame of movement. Ƹ̵̡Ӝ̵̨̄Ʒ аІiсә

It seems to me that the name of this category is incorrect. There are male and female Lionguard (Oppressor Weapons) collectors, as per my snapshots. I have snapshots of all weapon listings and wanted to contribute to the information, but really think the category needs sorting first. 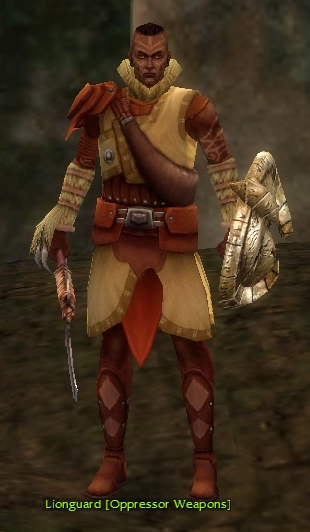 --The preceding unsigned comment was added by User:Arrowmaster (talk).

I was the one who moved it from Oppressor's Weapons to Oppressor's weapon. All the words that are placed in the square brackets, in game, following names are capitalised, it doesn't mean we have to follow it. Capitalisation talk can be found at GWW:NAMING, that is where it's stated about the preferred and discouraged methods of article naming. Common nouns are lowercase. Take a look at Dye trader, Rare material trader, Material trader, Hero skill trainer for other examples of common nouns being lowercase. ~Celestia 09:22, 10 July 2010 (UTC)

Ok. I take your point with the convention of just using first initial cap, rather than full initial caps, but my point was the possessive 's in the current category name. What I am suggesting is that the name might be better as Oppressor weapons, rather than the current Oppressor's weapons. I hope that is clearer?

Actually, on thinking more about this, you are most probably correct to keep the title as Oppressor's weapons because anet are inconsistent anyway, for example the seventh collector from the left in the Keep (as all of them) is titled Liongard (Oppressor Weapons), but offers a range of bows including the Oppressor's Longbow (note the 's)!! PS: Sorry I forgot to sign my first entry.

Ah, apologies. I totally overlooked the possessive apostrophe- my bad! I simply moved the name to conform to capitalisation, so I just kept the name as it was. Having it as "Oppressor's weapons" seemed odd at the time I did it, but then the weapons themselves are actually "Oppressor's <weapon name>" so it would be the best name for it, I assume. ~Celestia 14:47, 10 July 2010 (UTC)

Wish they'd fix the lights. Particle spawn rate is either too low, or they need to stick to the point where they're generated. As it is the lights completely disappear while executing *any* kind of movement. And let's face it. Who the hell stands still in Guildwars. Weapons with animated lights are better with.. well.. animated lights on them. 83.83.81.25 18:41, 18 July 2010 (UTC)

The lights leave a trail of what seems to be pixie dust like Tinker Bell does. Although Tink let off alot more than these little lights do. Wish that were more obvious, since yes they do seem to disappear when moving--Zeonozero 03:59, 20 July 2010 (UTC)

I keep forgetting that it's "Oppressor's" weapons and always end up typing "Oppressor"...so I added a couple of redirects to the category page for "Oppressor weapons" and "Opressor weapons", as those were my common mistakes. If you can think of any more, add them.--Thor79•

Oppressor's Weapons are not to be confused with Commemorate Weapons which cannot be used in the Hall of Monuments [[1]]. --Pharamon 05:19, 28 November 2010 (UTC)

Got some thinking they would have the nifty particle trail, sadly disappointed. I've added a note to the couple that didn't have a note (that were checked personally). Should the ones with no particle trail note that there is none or should the absence of a note be good enough? Wonder if most of them were supposed to have a trail? Aro