Guys! Halloween starts in a few days. Come get your Dread Masks^^ —Zerpha

yeah they do look cool, wish i had one but my ritu looks pretty halloween anyway with the ancient armor dyed black :) --Cursed Angel 20:57, 25 October 2007 (UTC)

is it just me or does this mask look strangly asuran? --Lou-Saydus

Yeah, I bought a dread mask for my ranger yesterday. It does look Asuran. I think the reason is that the Asurans have a Mesoamerican/Mayan/Aztec look to them. The mask kind of makes you look like an Aztec shaman or something of the sort. - Zelyoniy

Is officially the coolest mask ever! I got it today and dyed it white and it practically glows! I wish they had something like smoldering embers behind the eyes, that would be cool. |Nalana

only semi-decent on necros. I have no idea what people are thinking putting these on their female monk unless they rolled a terrible haircut. And that still would probably be preferable. --

Its ugly I dont care what you put it on its not gonna look good.

The beauty of armor on a MMORPG game is that you can get armor YOU like, just because YOU think it is ugly doesn't mean everyone hates it....

Define "unique", please. The uggliest mask ever, and doesn't fit to anything at all. Beauty is not relative, there are just people with no taste. TheyCallMeIgi 15:41, 5 October 2009 (UTC)

I think it Would work well on a Rit. I'm thinking about getting one on my monk mostly cuz I find monk armors kinda boring and this is def not a boring mask lol. Roflmaomgz 23:31, 28 July 2010 (UTC)

Not to beat a dead horse or resurrect a dead argument, but I agree that GENERALLY these are best on necros. Male necros more than females. But there are some specific instances (such as ranger primeval armor) where they go quite nicely with another class. Also with Warrior Elite Dragon.67.181.177.133 02:03, 8 August 2011 (UTC)

I present thus to this arguement: 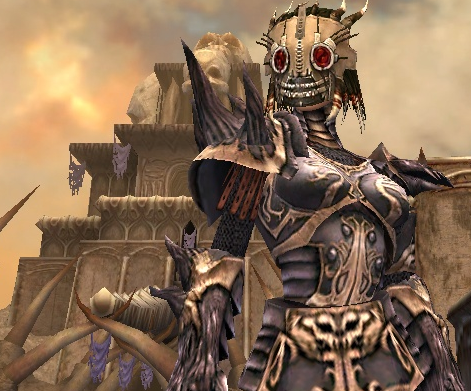 Can someone who has one post pictures of what it looks like from the side and behind? All of the images in the galleries are front-facing only. Since I'm looking at the back of my character's head most of the time when I'm running around, how it looks from that angle is important to me. Fourteen 20:00, 2 October 2011 (UTC)