Was random paging.. and it would seem sensible to have a link to the project to improve dye charts etc.. is there some wiki policy that prevents links to projects on the page that they're improving or something?.. --File:User Chieftain Alex Chieftain Signature.pngChieftain Alex 19:52, 11 March 2010 (UTC)

Cut that from the page to here. If anyone can explain what this is supposed to mean, they get a cookie and get to reinstate it. | 72

I think I can rewrite that and explain it a bit... The current dye system works better when the base color is the same for all items. All Eye of the North armors and many new items have red base color. That helps the client draw better where it should. It seems that textures are not dyed, then applied to armors like other engines do, but applied to armor, then the scene is rendered, and then the dye is applied over the rendered frame. Much like that Technicolor thing for B&W movies. Since it works that way, when you play with a lower spec machine, the dye may take a little to apply, and you'll see the item with its original base color. This is even more visible when you zoom out in some machines and with some armors. You may see aliases of the base color in the borders of the item, and sometimes even patches of the base color here and there on the armor, that would not happen when zooming if the item was dyed before being applied. Maybe the patches if the textures are mipmaapped, but not the aliasing. When they changed the dye system, they didn't change the base color of the old textures. That adds up with the weird dye behavior that happens when you apply more than one dye (the color loses a lot of saturation, and sometimes even mixes with the base color). Most Eye of the North armors dye... fine enough, and the same combination of dyes will have similar effects in all of them. But having very different base colors, dye affects Prophecies, Factions and Nigthfall armors of different professions in much more different ways, and some professions have a hard time to get that precise tone than others. I still don't know why do they use those base colors instead less glitch friendly ones like other games that use similar methods to colorize parts of the screen. Basically, the line says: "When they changed the system they covered the old armors with gray, but didn't bother making sure the old armors worked properly with the new system". Mith

Summarized and included. Cool. Thanks. | 72

I will leave it uncorrected until you reply or until the appropriate time has passed. | 72

Four days have passed. I have added the comma back in with an additional note in the edit summary. | 72

While the description says merchant value of 50g, it also says it cannot be sold. I tried to sell a vial to a merchant npc earlier, and he wouldn't take it. If other people get the same result, the article should be updated to note that you can't actually sell it for 50g back, right? LicensedLuny 00:38, 20 October 2010 (UTC)

Somebody should probably mention that you may not be able to trade pink dye, however other players can trade you their armor to have it dyed pink. Must watch out for scams though. →[ »Halogod

Pink Dye is available as a drop for Pink Day, it is a DIFFERENT Pink Dye that is tradeable, not purchaseable. Note that there are two Pink Dyes and they take up 2 slots in your Storage. One is Rosa's Dye which is untradeable and costs 100g. The other is Pink Dye which is tradeable and not buyable. The price of Pink Dyes will rise drastically once people A: Realize this and B: it stops being a drop, which is highly likely due to Pink Day being over almost a month ago. Mass speculation says/thinks that these dyes will stop being drops 1 month after Pink Day. Also, Rosa will become unavailable 1 month after Pink Day (Also speculation). Master Bei Shun 23:06, 1 November 2011 (UTC)

I did some weeding on the article. I reorganized so that primary points came first, with exceptions/notes following. I combined a number of phrases that more/less said the same thing. I tried to move most of the historically interesting info to Trivia, as it will not help current players use dye. I left most of the bug notes as they were, although I think some of them could be rephrased to clarify the issue. In general, I tried not to remove any content; if I did so, it was inadvertent in the copy/paste process while I moved phrases around.

One area that I think could be improved is specifically noting which items do not accept color; I don't think the section has to be exhaustive, but it would be good to cover all the general item types. Another area that might still be unclear is how metals, metallic materials, and non-metallic parts appear differently when applying the same dyes.  — Tennessee Ernie Ford (TEF) 21:56, 16 October 2010 (UTC)

Thanks! I know that rewriting these pages is a lot of time and effort. I addressed the Limitations section so that, instead of listing the things it doesn't apply to, it lists the only three things it does. (Of course, I might be mistaken.) I also merged each entry with its salient remark so it would be more concise. | 72

Are you sure it didn't dye it to a very similar color? I have a bandana that came out more red than pink (and I'm guess that the Woad uses similar color mixing). I'm gonna try dying it gray and then red to compare.  — Tennessee Ernie Ford (TEF) 01:25, 18 October 2010 (UTC)

Forgot to post the results. Using red dye, the bandana looks orange/red-orange. Using pink, it comes out closer to red, but very similar color. (No difference if dyed gray first or not.) As noted in the article, the material has nearly as much impact on the final colors as your choice of dyes.  — Tennessee Ernie Ford (TEF) 09:57, 5 November 2010 (UTC)

While this cannot be refuted, neither can we prove whether black dye can always be traded to merchants. On this page, there's only one contributor here who says they couldn't trade to a merchant; there have been lots of updates since that post. Also: it's possible this applies to the summoned merchant but not those in GH...or the OP meant dye traders, even though they typed Merchant.

I think we should remove the note unless we have a couple of recent reports of people being unable to sell to Merchants. — Tennessee Ernie Ford (TEF) 04:27, 13 June 2011 (UTC)

I think I noticed it's name changed to Vial of Rosa's Dye [Pink], but it could be that I'm wrong, and it has always been that way...--Mark is Beest :D

The pink dyes bought from Rosa Salvitas are not tradeable, but the new pink dyes obtained via random drop from foes are tradeable. Furthermore, the 2 different types of pink dye will not stack with one another. Does anybody know if dye trader NPCs are selling these yet? 64.15.81.27 06:06, 2 October 2011 (UTC)

Just a quick note, found it useful and decided to place it here since I'm not familiar with editing and don't know if there's a better spot.

When using a Vial of Dye [Pink], to dye something with multiple slots [armor/weapons], you can combine it with a Vial of Rosa's Dye [Pink]. The problem is, it treats it as if you used two of the same dye, like 2 yellow, because the colors are both pink, and you therefore need to use another color to mix it with.

Just thought anyone who wanted to mix two for that brighter effect, or anyone interested in stuff like that in general wanted to know. Batl Skard 03:33, 6 October 2011 (UTC)

this is because pink and rosa's pink are the same item with the exception that rosa's pink cant be traded or sold so people like me who bought a stack or stacks of it dont flood the dye market.-

No, he's sold out of that vial. You don't see that happen often with dyes; Pink is new, so I expect it to be in short supply for a while. You will see that happen with specific mats at the mat trader (especially on days in which Nicholas is requesting them), with runes/insignias at the rune trader, and especially with passage scrolls at the scroll trader (when Kanaxai is the ZB, you can't buy passage scrolls to the Deep). – Tennessee Ernie Ford (TEF) 17:12, 10 October 2011 (UTC)

Are pink dyes supposed to be droppable? I just got one while vaettir farming. 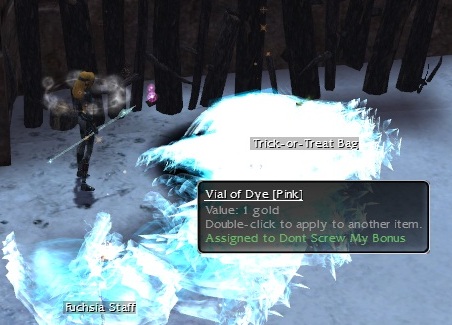 Since when? That must be quite a recent change.

I've noticed that there is a difference between the color I get when applying Silver Dye to the PvP Scar Pattern armor vs. the color when applying Silver Dye to the Scar Pattern armor I bought in the Prophecies campaign. Does anyone know if that difference in color is intended? I very much prefer the color of the PvP armor. Unfortunately it does not look like there is any way to reproduce that color for a campaign character. -Zentard 15:40, 17 October 2011 (UTC)

Have you considered that the lighting on the battle isles is quite different (brighter) compared to the rest of tyria? Otherwise, provide some screenshots of the same name of armor (pvp and pve version - with same dye) while standing in the same place? :p File:User Chieftain Alex Chieftain Signature.pngChieftain Alex 21:30, 29 November 2011 (UTC)

There are several items in the game that have identical names and even similar properties, but aren't identical. It could be that the two scar patterns aren't the same. Alex's idea is spot on: make sure you are comparing the two patterns in near-identical circumstances. – Tennessee Ernie Ford (TEF) 06:42, 30 November 2011 (UTC)

Newly crafted armor pieces have a different dye behavior than old ones. 'Tattoo' and 'scar' armor pieces are not an exception. Mith

Can we get some clarity here. This says there are only two unique items that are dyeable, Torivos' Rage is also listed as unique. It is dyeable and was added to the list then removed. Should it be added? This is an attempt to keep a possible revert war from happening.

female ranger tyrian gloves cant be dyed as noted on their page, is it worth noting that on this main page as the page does say about elelmentalist headgear etc.Spark-TBa 16:23, 12 May 2012 (UTC)

Just wondering if anybody has ever seen Gray Dye as a drop, or if they are only available from merchants. If this is the only dye that doesn't drop from monsters perhaps that should be noted somewhere? ninestories 04:16, 2 July 2012 (UTC)

Maybe it's just me, but the line under Exceptions doesn't seem to imply that it isn't available as a monster drop, only that it can, as an exception, be purchased directly from merchants & collectors. Perhaps the line should begin "Gray dye is only available..." I would make the change myself, but I can't say for certain that these don't in fact drop from monsters or appear elsewhere outside of merchants/collectors. ninestories 14:36, 3 July 2012 (UTC)

I think the problem was it only implied the availability; it said nothing at all about foe drops. (But the same could be said for Rosa's Dye...so in the context, it seemed self-evident to many editors.)