I just got Nightfall recently (it rocks!) and have been using this skill a lot. I observed that the burning effect doesn't seem to trigger consistently. Sometimes it burns enemies adjacent to me, sometimes it doesn't, even when they're clearly next to me, even the ones i'm hitting. I'm not sure if this problem is specific to this skill, or has to do with range in general (although Cyclone Axe doesn't seem to suffer from the this problem), or maybe scythes have a slightly longer range (improbable). I always use Pious Assault to end this enchantment. Any ideas? Vedreus Aardimus 07:08, 14 January 2008 (UTC)

I'm getting this problem too. I'm removing the enchantment with Pious Assault and can see the enchantment disappear from my Effects Monitor but sometimes no burning is applied. And the foes are not immune to burning. --Combatter 23:01, 23 June 2011 (UTC)

Is that Balthazar in the back ? Since its holy damage and all, sort of a temporary damage mod like Avatar of Balthazar.Farlong 05:20, 11 September 2008 (UTC)

Will this overwrite the Melandru Avatar earth damage? If cast after the avatar it would only make sense that it would overwrite. I will do some testing to confirm this. Nay the One and Only 19:42, 14 January 2010 (UTC)

Confirmed it does overwrite the current damage type even if its damage cause by an avatar form. Nay the One and Only 21:03, 15 January 2010 (UTC)

Thanks for posting. I've made the change. (If you see something like this again, please feel free to change it yourself; registration is not required.)

thanks! I wish I could say that I left two more in there as an exercise for the reader, but ... I wasn't paying enough attention (didn't realize that ANet likes to keep repeating itself so much).  — Tennessee Ernie Ford (TEF) 11:48, 4 May 2011 (UTC) 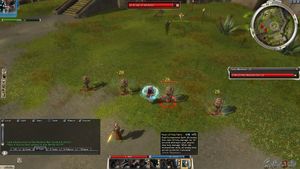 As far as I know, all holy damage directly caused by skills is armor-ignoring. I'm not sure if it's really worth a note.--Ruine