Oh a better idea be a Kurzick and show Rhea that her daughter allied with the kurzicks MageMontu 20:48, 9 August 2007 (UTC)

Even better yet give her to the kurzicks as a gift/prisoner so they give you tonnes of faction for capturing an important luxon.(Marsc 21:37, 10 August 2007 (UTC))

Ok you do realize that being kurzick or w/e will not matter and elder rhea likes Master Togo not Mhenlo so you people can stop thinking up stupid things to say like you have been up above. Galeron

She should be the daughter of Captain Juno according to the Chinese Manual. Evenfall 05:47, 18 August 2007 (UTC)

It is also confirmed in the downloadable GWEN manual on the guild wars website. --- Raptors

I just got an idea... Master Togo is the father! Thats why he was so urgent to let Shiro Tagachi kill him. hehehe. --The preceding unsigned comment was added by User:Guillotine X V .

"Turtles: You gotta love them." lawl --The preceding unsigned comment was added by User:Yakslappin (talk).

They had to put something in for the boys to pay attention didnt they lol I dont have the tendancy to be looking at my hero's bottoms when out playing... Melhei Haemathet 06:40, 18 January 2008 (UTC)

Do /dance so she starts dancing as well...YUMMY! Also, I think nobody is perverted enough to be staring at her rear end during a battle.

meh i like it, Livia has cleavage and Xandra has a showing "cheek" who cares. IMO they are hot character renders without the revealed parts but w/eKosmic 05:30, 20 November 2008 (UTC)

Just wondering, the dialogue says "Xandra starts with basic ritualist armor, labeled as Turtle Clan armor but with its own unique appearance. Like most heroes, her headgear is hidden." however it quite clearly isnt on any of the images. I havent seen her hair :( Melhei Haemathet 06:38, 18 January 2008 (UTC)

I wish hair would show outside of the headwraps, like it does with Xandra and Chiyo, heck, even Kaolai has their hair showing...*good idea for GW2* --The preceding unsigned comment was added by User:Tengent (talk).

please think before u say something because if u looked good u could see her hair stick out of the headwrap at the backside of her headGregar repa 12:21, 20 June 2010 (UTC)

If that's all you can think of as a response, I'm not sure why you even bother. -- ab.er.rant

"Who would've thought humans are perverts, let me blame everything I see on men! Stop staring at women!" Ƹ̵̡Ӝ̵̨̄Ʒ аІiсә

i can see deh nipples[edit]

Dont blame them , Anet surely doing this too further...they've put too much efforts on these sex-sell effects. In fact if they focus on other sides gw might be one of the best visual game currently. I dont like Stoning looks 100% same as Ebon Hawk and Stone Daggers.--RedTeaCat 04:32, 3 June 2009 (UTC)

She casts Binding Chains and things get hexual. Ƹ̵̡Ӝ̵̨̄Ʒ аІiсә 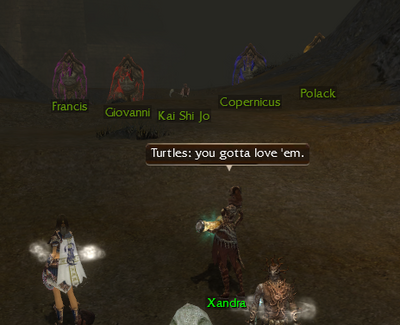