From Guild Wars Wiki
< User:Shard
Jump to navigationJump to search

The Throne of Judgment is a Capture Points map in Heroes' Ascent. This is the last map you fight on before entering The Hall of Heroes (arena). 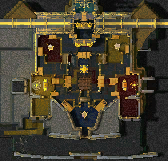