This page is an archive. The contents have been moved from another page for reference purposes only, and should be preserved in their current form. Discussion on this page is not current. Any additions you make will probably not be read. The current version of this page can be found at User_talk:Lacky.

Hey Lacky, haven't posted in a long while so I figured I'd drop buy and send you a hello. :D Can you believe it.. 2009 is almost over. And Wintersday is coming!! :D Magic

Haha indeed. Just came back from camping, haven't been on the wiki in 3 days. I was craving it majorly. I am not looking forward to seeing what my watchlist is like. lol --

Lacky, I noticed on your pages, there seems to be a mishmash of links at the top of your pages. I checked the "template" you are using, your talk page template, and checked the source. You might want to check into using line breaks (<br>) after each of your template links from that template.

I did try that when I was first creating it, but it kind of puts it out of position (for what I like anyway). --

I have no idea what's wrong for you 42 sorry. Everything seems fine for me, and I have looked at it on two different computers with different resolutions. --

I can't believe you're not using Firefox.. /ashamed. :P

Magic was nice enough to show what I meant. I am having problems with my comp, it kicks me in the head every time I try doing a screen shot.

Oh, that, yes I do see that, I thought you meant something to do with those other links where the tools, links and friends thing was...Those "mushed up links" are because when I created the template for that, the latest update would be in a different position kind of thing where the text wasn't a long because the month/day/number name weren't as long. I probably should update it so that no matter what update it is it will always be right. ^_^ --

Omfg. This is embarresing. I just now realized you made the guru.. Lol. I was like._. I haven't seen lacky n years I better say hi and now I realized.. That was you xD --

Not at all. My mind has set "you" as the guy with the peguin. But the one there my mind set it as just another random dude. --

I think Tender Wolf is Burr King or whatever, along with also being Picture Host and possibly Spartan Destroyer.

Duely noted. Even so, the edit was made under Burr King so that's the way it should stay. If it is the same people, how about try recommending them a user merge? That way it would do it for them. And before anyone says it, no there is no hypocrisy in that, I keep my edits for each account under that account, I do not change them. --

I know. Its just a little im gonna say fishy that those userpages have all been edited by the same ppl the way that they have been.

I'ma stay out of it then. No need for action really, and especially no need for disruption on their pages. ^_^ --

You'd have to know her and her guild mates to understand...she's doing all of their pages for them. She has their permissions I'm certain, but you can advise her to clarify if you think its vandalism/socking...which it isn't.--*Yasmin Parvaneh*

Howdy! It is good to see you again! I think I still have you on my friends list in-game even still! =P --

That's what I thought. Other than being the same number three times in a row, what is it/has it got to do with anything? --

Well I woke up yesterday (today for you possibly) morning at about 6am (don't know why I set my alarm for then), and so I was tired and fell asleep after dinner at about 8-8:30pm until about 1am and haven't been able to sleep since. I tried sleeping for about 3 hours before I gave up and decided to come on here. I was going to get up in about half an hour anyway (5:30am) for a Guild Wars Event which starts at 6am my time. --

So, basically, you're voting for yourself and opposing everyone else? Karate

Who said he couldn't? Karate

Cmon he needed a support vote. 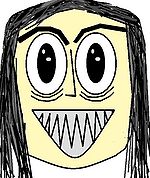 ^_^ Thanks for that! I hope you too have a very Merry Christmas and a Happy New Year! --

What's your point IH? Thanks Halo. --

Do you have two active usernames? I know we have been through this before, but you really never answered the question. Your Anet staff imitation is a bit over the top. You do 99% of your editing as User:Lacky so just WHY? -- Wyn

Let me answer your question with another: Why do players have more than one character? Also, I wouldn't call it imitation, it specially states, "wishes". --

Well, as you will notice, I'm not the only one that feels your use of the Anet logo, is more than slightly confusing. Having multiple characters is totally different than having 2 active usernames here on the wiki. All those characters are on ONE account. -- Wyn

Well you shouldn't be confused if people actually read it. Now please, let it go. It is allowed and shall be staying. Also, the only reason this seems to be such a problem for you (and others) is because you know that the account(s) in question belong to me. I can almost guarantee that there are hundreds of people that have more than one account. --

How did you get that user friend template to work for you? LOL, it's like mine won't do for me. --

What do you mean? What would you like help with? --

Why's that? What problem do you seem to be having? --

Shows up the old way with the heart, instead of my sig. as the image and background being black with foreground being light blue. --

Did you add the |Ariyen part or just have the {{User Friend}}? Because just using it without the |Ariyen will make it come up with the standard template. --

Hey Sharkinu, thanks for that. I myself didn't even know/realise that. I tend to capitalise usernames anyway. --

I left you a message telling you why...although what I was trying to do didn't go to plan. Could you chuck us a re-invite please? --

your close to being A DJ on blade O_o am i correct in thinking this?--Neil2250

He cant be a DJ because his connection isnt quite up to par. But yes he is close to being a DJ.

Drogo is correct (although I am interested as to how he knows?). I am Blade Staff however. I am currently a Forum Moderator of the Blade Radio Forums. If you need, you can reach me at my blade radio email, Lacky@bladeradio.com. --

Dang Lacky you dont remember talking to me in game? Same day you asked me if I was gonna run for Bcrat. BTW I know everything