Guide to the Desolation run

Contrary to popular belief, The Desolation can be ran across without the aid of a Junundu or resurrection skills. Many end-game Nightfall rewards can be accessed extremely quickly by running through the Desolation. These rewards include Vabbian Armor and Ancient Armor from The Kodash Bazaar and Bone Palace respectively. Unlike other runs, crossing the Desolation has the added difficulty of dealing with Sulfurous Haze, an effect that will cause death if the player stays exposed for too long.

To most players, the application of the Sulfurous Haze effect seems random and unpredictable. However, that is not the case. When the player synchronizes movements with the internal instance timer described above, the application of Sulfurous Haze no longer becomes random. With perfect timing of the exploit, the player will be able to survive on the sulfur for a maximum of four seconds.

To perform the exploit, do the following steps in order:

It will take a while to get used to how the exploit functions. Once adjusted, you will be able to instinctively run between safe spots without much effort.

There are two ways to run across the Desolation:

There are various spots within the Desolation that will not trigger the Sulfurous Haze effect. These areas are referred to as "safe spots".

Although some areas may appear safe, they may be unsafe. The same concept applies to areas that appear to be unsafe.

Areas encountered during a Desolation run[edit]

From Gate of Desolation to Remains of Sahlahja[edit]

Without a shadow stepping skill (easier)[edit]

Route: Gate of Desolation to Remains of Sahlahja, no Shadow Step

With a shadow stepping skill (harder)[edit] 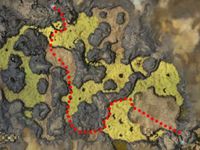 Route: Gate of Desolation to Remains of Sahlahja, with Shadow Step 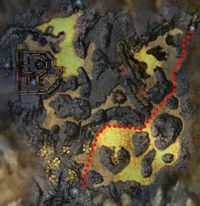 Route: Remains of Sahlahja to Basalt Grotto, no Shadow Step

Normally, you cannot enter the Bone Palace from Joko's Domain until late in the game. However, if any party member has the quest A Deal's a Deal, the entire party will be transferred to the palace upon completion. Usually, the runner should have the quest, otherwise this run becomes much more time consuming.

From Basalt Grotto to Lair of the Forgotten[edit] 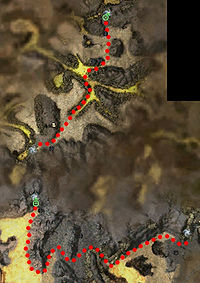 Route: Basalt Grotto to Lair of the Forgotten

From Bone Palace to Ruins of Morah[edit] 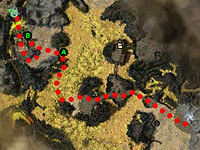 From Bone Palace to Lair of the Forgotten[edit]