So wait. A stance? With an activation time?

Yeah, Stance with activation time makes no sense. Furthermore the duration, coupled with Dwarven Stability, would seriously make running anywhere far too easy. 33% faster movement speed and immunity to knockdowns for 135 seconds with max title rank? (assuming you're drunk) Add that on a dervish with Vow of Silence and you can say goodbye to challenge in running anywhere.76.175.146.10 11:17, 31 August 2007 (UTC)

This skill activates just like any other stance. I don't see the 1 second part at all. o_o;; Error?--Seth Crimsonflare 22:56, 4 September 2007 (UTC)
No one wants to use VoSilence over and over and over though..

All movement-increasing skills are stances, enchantments, or require you to be under an enchantment, and are thus indirectly or directly removable, or they're elites, or they require nearby dead allies, or they require nearby allies, dear. Only the Paragon skill "Make Haste!" is the "ultimate running skill", at least from what you implied (that it has to be unremovable) and that can't be used on yourself. "Charge!" might be so as well, but it's elite, and thus cannot be used with VoS or other important skills you would bring while doing any of the more challenging runs. So, I fear I'm not sure what you meant by an ultimate running skill. I would appreciate it if you'd inform us of precisely what you meant, though. ^^ Isolina Black 11:51, 3 July 2008 (UTC)

Oh, forgive me -- "Fall Back!" increases movement speed and appears to be unremoval, as well. Not very long duration, but actually appears to be a fairly good skill... Never seen it in use, myself, oddly enough, though. But might that be what you're referring to? It does seem quite godly for a runner, despite me personally never seeing it used... Isolina Black 11:55, 3 July 2008 (UTC)

Actually he only mentioned stance removals, not enchants. it makes a difference because runners should prepare beforehand knowing whether the area they are running has those things or not. Roflmaomgz 00:38, 14 April 2010 (UTC)

Anyone noticed that the recharge time on this skill coincidently happens to be the time taken to loose 1 drunk level? Makes playing and knowing when to drink easier :)

I was trying this out in Glint's Challenge and noticed that something was strange; the duration seemed much longer than it should have been sp I checked the statue and I was at 40% faster move and attack speed. That's equivilent to rank 17 in the Deldrimor Title track. The team had used a Grail of Might and Armor of Salvation and the drink was Aged Dwarven Ale. It was crazy fast.

Either that or a hidden bonus not specified by the skill description? Dwarven Ale giving it a higher rank momentarily? FelixCarter

I noticed this bug too. I took 2 screen shots of the bug 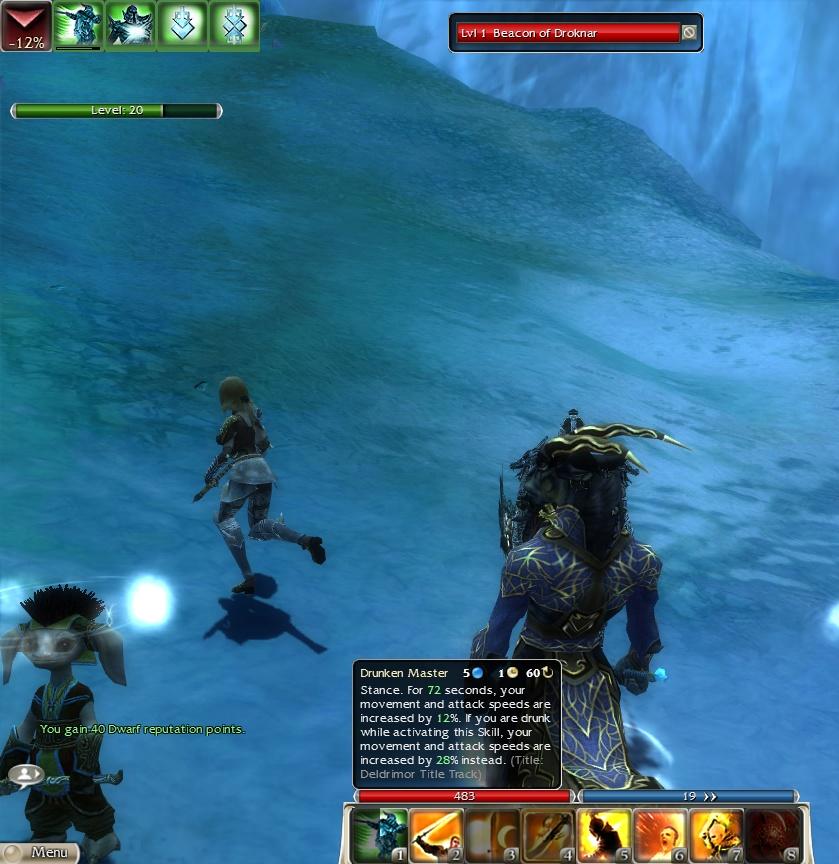 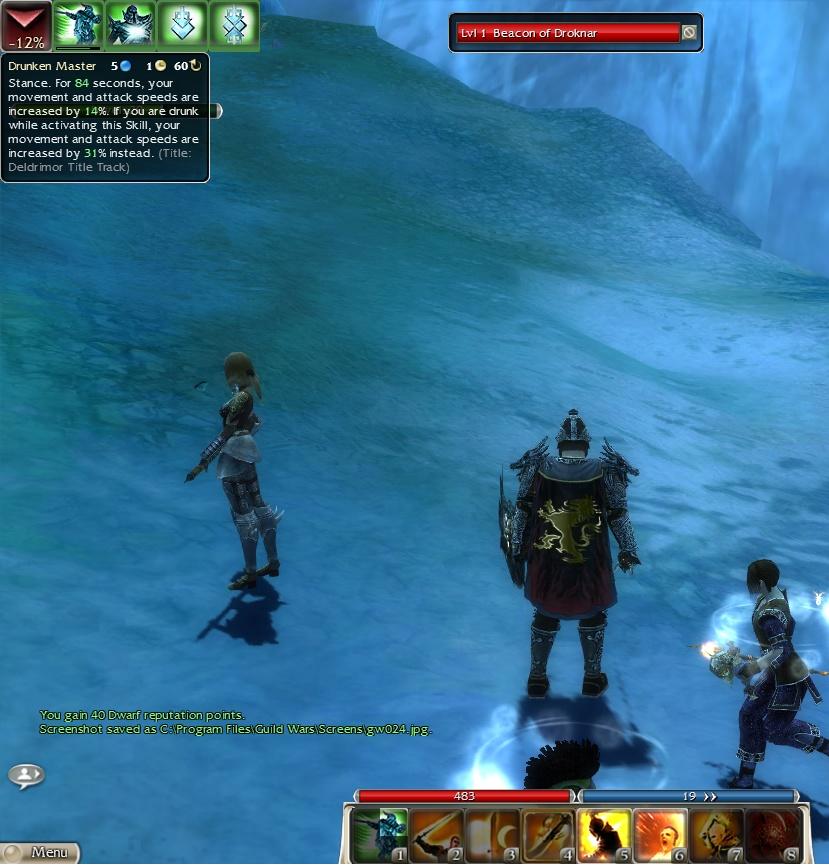 However, the buff icon is the equivalent of rank 8! As a bit of extra info, I was using no alcohol at the time and I was in the secret lair of the snowmen. --Crasedmonkey 20:52, 8 October 2007 (UTC)

Yep, I had that happen too. Regardless of my rank, it always showed rank 8 in the effect monitor. However, upon timing the duration, it lasted the correct length of time for my rank. --Thervold 04:47, 20 October 2007 (UTC)

Shows up on the effects monitor with the correct rank now.--The preceding unsigned comment was added by User:72.189.243.71 (talk).

Is there proof that this is a reference or should it be re-worded to "this may be a reference to"...? LunarEffect

I highly doubt it's a reference to a movie. It's more than likely just a reference to the drunken master fighting style popularized by other RPGs such as Dungeons and Dragons. ~Umbrafire 20:46, 30 July 2008 (CST)

It's clearly a movie reference, the drunken master style from various RPGs is based on the movie, not the other way around. D&D predates the movie by only 3-4 years, and the Drunken Master prestige class wasn't published until after The Legend of Drunken Master (the sequel to the original movie) was released. 71.234.234.87 03:59, 3 August 2008 (UTC)

I don't think "Drunken Master" is an accurate translation of the kung fu fighting style at all, so it is unlikely a reference to that. Misery 13:57, 9 October 2008 (UTC)

Zomg, why doesn't this wiki have an ignore policy, I can't revert again, please note w:Drunken Master goes to the movie and w:Drunken Boxing goes to Zui Quan. No one in the martial arts world would refer to Zui Quan or any other drunken style as "Drunken Master" so the current trivia is plainly wrong. It comes from fanboys and that movie. Someone else revert plx. Drunken Boxing would be the correct colloquial term, but the actual translation is something like "8 Drunken Fist Style". Misery 14:23, 9 October 2008 (UTC)

I personally agree with Misery but I would like to hear the responses from the people who have changed it.- TheRave

I'm sorry, but that's insane. There is no Drunken Master fighting style, neither literally or as a translation of the soft fist Wushu styles. How can it be a reference to something that doesn't exist in reality or in theory? Mr J 14:32, 9 October 2008 (UTC)

Yes, there is no Drunken Master fighting style. So it's just plain wrong. Either say Drunken Master is a reference to the movie or inspired by the Drunken Boxing style. --mira castillo 16:23, 9 October 2008 (UTC)

To all: apologies in my pop culture fact checking. True to what some of your translations are, drunken fist is the form or drunken alchol fist as direct translated to which i am refering. Colloquial term being drunken boxing. As far as the double posting, that was an error, lost connect came back and made the change for what i thought was the first time. Well said, The film reference should be used. Thx for the feed back. --Sorrow Pathfinder 17:48, 9 October 2008 (UTC)

I saw a documentary on Dicovery Channel the other day about martial arts fighting styles, and they mention a style that uses the impression of being drunk combined with certain other drunken-like moves to throw the opponent off balance. So I believe such a (eastern) fighting style actually exists, but it's named differently. 87.210.150.58 09:11, 1 January 2009 (UTC)

This is a VERY good skill.

Do you think its useful>[edit]

Drunken master + Dwarven Stability at r10 gives a 180sec stance (180s = 3min)so you can control your drunk level all the time with drunk effects turned off. This way you can play and get your title done at the same time without wasting it inside towns/outposts:) For melee players it may be even useful;) What do you think about it? --The preceding unsigned comment was added by User:83.27.226.115 (talk).

Can you maintain the drunken modifier if you recast before it ends? I was testing earlier and it seemed like I was still at 30% faster IAS even though i was no longer drunk when reactivating the skill. Ƹ̵̡Ӝ̵̨̄Ʒ аІiсә

As far as I can tell, re-activation after a wee drink has worn off will not continue to provide the full bonus... which is a shame. I'll play ball once when I zone, sure, but insanely good skills that require going into inventory to pop consumables before hitting the skill bar every minute is a bit of a jerk-around imo. 75.158.134.214 17:35, 26 August 2011 (UTC)

An unlinked stance that combines IAS and movement... wow. This doesn't just kill two birds with one stone, it vaporizes them. Now I can get my monk drunk and run around with a Strength of Honor sword while using brawling headbutt -> Holy Strike and smite-aoe on things ... great dwarf armor, blessed insignia and tactics shield so it's not so suicidal maybe. Don't try to tell me its stupid; its drunk. 75.158.134.214 04:29, 26 August 2011 (UTC)

This skill is cool and all but people shouldn't have to buy alcohol for this (especially when you've reached max drunk title). I'm thinking a bottomless keg should be introduced; works like an everlasting tonic, but you're drunk until you leave the area rather than in a disguise, and it doesn't count towards drunk title when you use it...perfect for skills like this one CrazyGorilla 21:24, 11 October 2011 (UTC)

I'm thinking people would probably sign on to this idea, if only there was a place to present your suggestion to ANet. – Tennessee Ernie Ford (TEF) 21:29, 11 October 2011 (UTC)

Really I never used SoS on my rit... they nerfed it so i broke him out and decided to use it to farm seeds... I dropped a couple things and added in this and healing breeze. It seemed to work well and really healing breeze was only a degen counter for hexes. I kinda decided to wander around tyria the same way and I'd really never gone anywhere with the character. It ended up getting me thru to fishermans for fin farm there than I ran it from LA back to asc and anything that tried to slow me down or got in my way i dropped spirits and hexed them back and took off again. I think it could be a new sport... its kinda a half run half farm dumb stuff... i wouldn't really call it running or farming maybe "speed farming" seriously its pretty funny when bored... insomnia sometimes makes me do dumb things71.181.23.253 19:21, 10 February 2012 (UTC)