No longer exclusive to mineral springs[edit]

This skill and Ineptitude are the only elites from Mineral Springs which can be captured elsewhere. Previously the Mineral Springs elites were notable because it was the only place to capture them, to the annoyance of many a 55 monk. 58.110.141.210 23:40, 15 November 2007 (UTC)

right...however, with the implementation of hard mode, you could also get those skills easier with tomes. —Zerpha

Umm....I have one thing to say to that, most people in this game don't bring a sig of capture with them on an elite mission. So its basicly still exclusive to Mineral, unless some noob found a way to get all the way through the second way and brought a Sig capture,but hey, I doubt anyone would waste that much time for one thing

I probably played against the most annoying build ever that used this elite. It was some war with about 3 interupting attacks, he ran up to you, spammed them, then flourished and did it again. It was in CM so if you didn't notice and he came up to you, it was pretty much over for you. 76.186.15.83 13:55, 14 December 2007 (UTC)

this skill is particularly effective on assassins as they have some of the longest recharging attack skills, it can be used at the end of a skil chain to recharge the entire chain Coruskane 13:53, 5 March 2008 (UTC)

Exactly. I think it is only good if you want to run a W/R build with bow attacks. Like you were in a party on Unwalking Waters with 2 or 3 more warriors and you want to attack the dragon. But don't expect miracles :P I tested a build like that on Master of Damage it was about 30 dps Eth 23:51, 25 August 2008 (UTC)

You CAN cap it from the Flame Djinn in Catacombs of Kathandrax. I've done it on multiple characters. The person who undid my edit should go test it out before undoing my change. Jafar 20:14, 9 November 2009 (UTC) 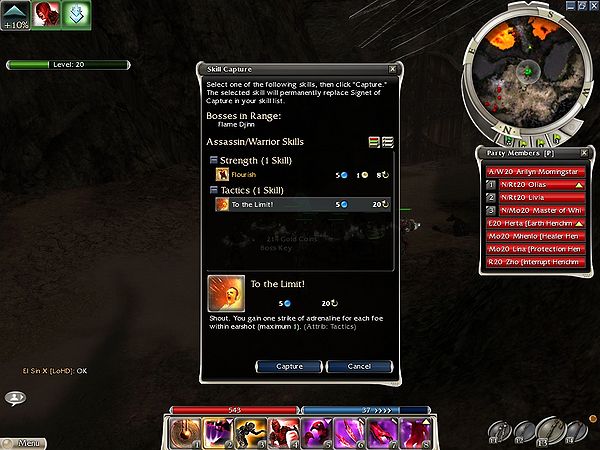 Looks like the guy is trying to do a chop.- Vanguard

Well no, if something is disabled you can't recharge it with this. Recharging and disabled are NOT the same.

Recharging and Disabling are the same thing. Take Eternal Aura for example, when you use it with an Avatar form (Disabled for 120 seconds), it will recharge it.-- Luigi

Yeah, I realize I should have inserted my comment above yours, since I meant to address Koen; I don't wiki much. -- Luigi

yeah it does. but disabling and rec still isnt the same. Its just treated the same when its about insta-recharging teh skills. Disable cant be reduced, which is fatal e.g. for the Derv Avatars in PvP. No Zephyr of Paradox or so would evar help em to get their form up again.

Cute trick with Deadly Paradox, but won't do anything for Spell Shield because Flourish will be disabled too. --The preceding unsigned comment was added by User:Misery (talk). 16:53, 5 January 2009 (UTC)

I don't get it. This skill instantly re-activates (disabled skills or lengthened recharge skills) attack skills. As forms aren't attack skills this comparison is kinda pointless. Anyway.. there is a reason why Oath Shot's got the "50% miss chance with Expertise 7 or less". It was used exactly for reactivating dervish forms (with arcane mimicry). SamoK 16:19, 12 January 2009 (UTC)

Oath shot was never nerfed for peeps trying to maintain derv forms...in fact I dont think anything significant on it has been changed since it first came out in 2005, well before dervs were conceived for gw.--Justice 14:39, 27 May 2009 (UTC)

This might be a noob question, as I haven't capped this yet, but does Flourish "recharge" adrenaline skills, or just energy-based ones?

I've never found a use for this skill, favoring War Endurance for high energy demands or adrenal denial areas. Today, however, I tried it out when vq'ing Verdant Cascades. With the extra energy already provided in the Tarnished Coast (which prevents War Endurance to trigger early in a battle) and the adrenal denial by the Wind Riders, Flourish worked great with an all energy skill bar. There may be some other areas that are similar, hence the "general" suggestion. Lord Flynt 04:50, 24 September 2012 (UTC)