I dont know if it was a glitch or it just proves how stupid goren is but when i unlocked him, he had all weapon skills in sword not hammer. LegionRat 12:01, 23 September 2008 (UTC)

Maybe a glitch? Never noticed that he had sword skills. Did you manage to take a screenshot together with the unlocked notice? -- ab.er.rant

"For justice! And truth! And… stuff!" problem[edit]

The quote "For justice! And truth! And… stuff!" reminds me of the newest superman movie (2006 movie), where Perry White says "But does he still stand for truth, justice, and all that stuff?" I think that might be worth mentioning.--Unendingfear

Could someone elaborate on the significance of "Goren" being an anagram of "negro" please? Considering the latter word has a fairly narrow set of connotations since falling from general usage, I don't imagine there's any relationship unless the game actually implies one. --Irgendwer 09:36, 19 February 2010 (UTC)

Agreed. It may not necessarily be racist, but it's definitely questionable. Replaced with something more relevant to the character. -- Tekn0mancer 16:51, 20 February 2010 (UTC)

Funny bit of trivia about the trivia; the word "negro" is blocked by the in-game chat filter, so people on spanish localization cannot buy "Tinte Negro" (black dye) but instead has to buy "Tinte -----" XD.--Fighterdoken 16:56, 20 February 2010 (UTC)

That's probably an unintended side effect of the English-language chat filter. It even filters out the word "bite," presumably so people can't say "bite me" (which is the only possible English explanation I can imagine). The henchman Talon Silverwing has a battle quote that renders as "ever seen a Tengu that could take a ---- out of you," and you can't type the name of several skills in chat (or call them in battle) without being censored (Wallow's ---- and Vampiric ---- are just two examples). IMHO the chat filter needs to be nerfed because it's way overpowered. -- Tekn0mancer

Or you can turn it off. Reaper of Scythes**

Although not everyone agrees that it is racist to use the word "negro", it is actually considered an offensive term in the African American community in English speaking countries. So, I think that "trivia" should be kept off the page. --Lania Elderfire

You want it removed simply because it's considered offensive to some people? That's a pretty slippery slope. -Auron 07:55, 26 March 2010 (UTC)

When nearly the entire younger generation of African Americans find it offensive, unless used in a historical context, I really doubt we're being hypersensitive. --Lania Elderfire

Agreed. Coincidence of course, and probably used to stir the pot per Misery. If the trivia is returned be sure to add the following to their respetive pages:
Melonni - Mole Inn
Tahlkora - Halt Okra
Margrid the Sly - My Hitler Drags
Pyre Fierceshot - Perfect Hosiery
General Morgahn - Mangle Her Organ Sardaukar

@Lania: And yet they call each other "niggers" all the time, completely willingly. -- Armond Warblade

They call each other "niggas". "Niggers" is too white. Even Wikipedia recognizes the difference. --

RIDDLE 00:43, 29 March 2010 (UTC)
When African Americans call each other nigga, it's a "term of endearment" or brotherhood. When Caucasian people calls African Americans nigga, it's extremely offensive... I'm sure you can tell the difference. In anycase, that's not even the point. --Lania Elderfire

Since the trivia's originator has apparently decided to be clever and try to slip it back in without anyone noticing, here's my position: even if Goren were the only dark-skinned character in Nightfall, which he is not, "Negro" has connotations that are in no way relevant to the NPC. The word is completely outdated, a relic of our history that is only still in use today because of its historical significance. Goren is not an object of this history; nor does his narrative role bear any resemblance to it. Therefore, considering it worth mentioning that Goren is an anagram of "Negro" merely because his skin is dark is fallacious. --Irgendwer 15:53, 7 April 2010 (UTC)

The fact that the character is black and his name is an anagram for Negro, which you don't know means black, is worth noting. If all other characters had a racial slur anagrammatically influencing their name it would also be note worthy and would completely support my hypothesis that Anet does not a have a single black person on the GW development team, or they have a singularly racist team member. Also, if Goren means moon in hebrew is allowed to stay up then so should the racist trivia. I mean who gives a mookie stink about Goren meaning hebrew, when it's not relevant to his being at all?--Underwood 22:41, 17 April 2010

My granddad is Hebrew and I am offended by that being in the trivia.
Either we have both or neither. --The preceding unsigned comment was added by User:Tesslina (talk).

I know Negro means black. As I have stated, the connotations of the word need to be considered in addition to its literal meaning, since no sane developer would name a character after a racial epithet without knowing something of its history. And I agree with you that, if other characters' names were anagrams of racial slurs, you would have every reason to suspect ArenaNet of some racist intentions. This is not the case, however. There are many dark-skinned characters in Nightfall as well as many light-skinned ones, not one of whom appears to be a racist developer's puppet.

On the other hand, you're probably right about the Hebrew meaning of Goren being insignificant, unless the character can be shown to have some lunar characteristics. "Moon" could be a thematic tie to Nightfall, although I doubt it. --Irgendwer 23:25, 17 April 2010 (UTC)

I can't believe that people are going to this kind of extreme length to find offense in a video game. -- Wyn

Trolling 101, find something true, and make it look worse than it really is. --Master Briar

It should be there or have the Hebrew one removed for my Religious sake. --The preceding unsigned comment was added by User:Tesslina (talk).

No, leave it alone. --Lania Elderfire

That is being racist as I find Hebrew offensive and it's there. Yet, the anagram is not allowed to be there.

I am sorry Tesslina, but on this wiki we are all a particular kind of racist against people who find Hebrew offensive. I don't even know what kind of racism that is, but apparently we are it. Also, that's really bad trolling and we are going to ignore you ^_______^ Misery 07:34, 19 April 2010 (UTC)
The Hebrew is a fact... and makes trivia... the anagram is incidental and irrelevant and offencive to more people than just you... why the heck are you upset that the word means Moon in Hebrew? ... (IRT Edit, Whoops I musta clicked edit o nan old link, sry Misery and JP for the confuse) 65.6.156.101 11:38, 19 April 2010 (UTC)

On a related note as to the ridiculousness of the argument over what a name was intended or not, and who it might offend. Who cares? Get over it, and stop being ridiculously overly sensitive about things! Otherwise we will keep taking words out of use because someone somewhere MIGHT find them offensive. Did anyone notice that Captain Quimang's name gets censored by the chat filter as well? Once again, who cares, get over it! 69.183.30.93 16:02, 4 June 2011 (UTC)

Everytime he activates this shout, the party doesn't gain its benefit, though good for a hammer NPC. 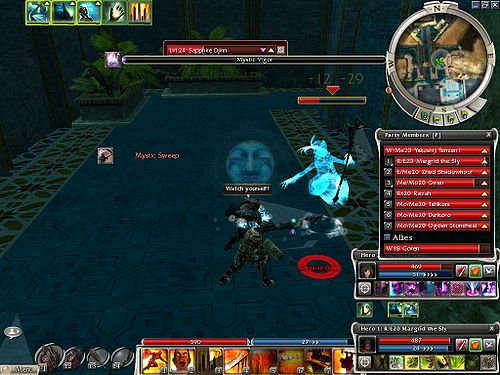 You can find his tomb in gw2 raid: the key of ahdashim: https://imgur.com/a/AkdYabt