It would be very helpful if someone included a note concerning the amount of energy spirits possess, and to what extent spirits expend energy using their skills (if they do so). Thnx, Guttersnipe 20:16, 12 October 2007 (UTC)

according to the old wiki, all spirits always have 31 energy.

The first note in the old wiki of this article is that if you cast it on anything other than a spirit, it choose the nearest spirit next to target as the target. —Zerpha

That doesn't really seem like an anomaly... If you use Spirit Twisting on a non-Spirit foe or ally, it targets the nearest spirit in range...That's what this one does...Really just to make them easier to use... RitualDoll 04:47, 17 December 2007 (UTC)

Same goes for Taste of Death. Works both targeted, and auto-targets closes creature when something else is targeted. Also, which spirits use energy? Or is that note concerning energy denial from foes?--ChristopherRodrigues 03:08, 28 March 2008 (UTC)

Actually, this could be intentional, as you are able to target an enemy ritualist instead of draining your own spirits of energy. Paddymew 06:54, 20 June 2009 (UTC)

first thought was that the 3 energy gain (and conditionally) was absolutely horrible I took into account that this is the only non-elite skill that causes energy GAIN for the Ritualist except for "Energetic" was Lee Sucks (oops) Weaponmaster 07:57, 10 September 2008 (UTC) Edit; forgot about Essence Strike which surpasses this skill per cast at r15 and up but has longer cast and recharge. Weaponmaster 08:06, 10 September 2008 (UTC)
You are forgetting that essence strike can be used on recharge for energy, while this can be only used every 22 seconds depending on how many spirit you have. Justin6

HAHA, just thought of a way to quickly destroy enemy spirits with this[edit]

Spam Spirit Siphon and Aneurysm repeatedly. Result: Refill your energy at the expense of all of target spirit's health.

2 Versions Listed at the Priest Of Balthazar[edit]

Just noticed when unlocking some Rit skills he offers 2 versions of this spell, (see screenshot) one version says that it takes 36% energy, the other states that it takes 24% -- Brother Jotun 14:44, 21 June 2009 (UTC) 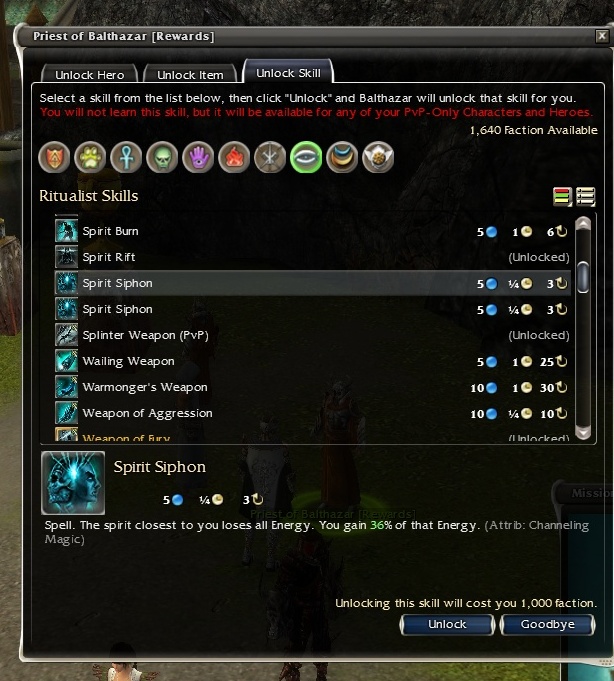 It's just the general trend of Anet's balancing. They try to fix one skill by making it better than the alternatives, then they need to buff the other, and so on and so forth. I'm implying that this looks like it will lead to a power creep because there is very little reason to use OoS over Spirit Siphon now, with the obvious exemption of running only 1 long lasting spirit or not using any spirits at all. -- euphoracle | talk 20:36, 21 June 2009 (UTC)

There are much better ways of E-management for a rit than this skill. This seems to work much better for non-rit primaries although I haven't seen many ppl using it. Works amazingly for me. Nay the One and Only 16:41, 28 December 2009 (UTC)

Why you are wrong euphoracle: OoS is better if :

+ They kill your spirits (about everwhere expect maybe RA)

+ Someone else has Siphon (so no team builds).

-Worse if many spirits are present and little people with SS.

At an effective rank of 12 in the appropriate attribute, here are the energy returns of various skills that increase blue bar:

Do they lose their energy, though the caster doesn't gain any? - J.P.

The edition of 11 September 2014 was quite good in compare to the last one. What was a reason to "improve" the table and add unnecessary row, ruining the correct data, doubling the remarks and adding the garbage in the form of non-hidden HTML comments? It seems that Wiki is suffering of poor fact and edition checking :-( --109.252.109.190 17:30, 3 January 2018 (UTC)

I opted for a custom template to put in deviating values, but it never caught on. I agree that edits like the one you listed are detrimental to the wiki's status. Perhaps we should revisit the discussion : Template_talk:Skill_progression#Manual_values_when_formula-induced_progression_is_inaccurate - Infinite - talk 18:10, 3 January 2018 (UTC)

Your custom template never caught on because this wiki is kinda deadish. If it really works just go and implement it on one skill page and see if anything bad happens. ;)
I'd suggest to undo that edit. The "new" table looks shit imo. Steve1 (talk) 19:56, 3 January 2018 (UTC)