This should be in the relevant title page, should it not? It is not a skill of any kind, it isn't even of the skill "type". Lightbringer's effect is on the title page, either a new section should be created for title based effects, or every related title should have their effects listed. -- Txzeenath 08:02, 26 August 2007 (UTC)

Kinda weak for a title track buff. Especially with all the dungeons being Dwarven Territory and this being uselss in 90% of them. The only titles which can be used in a dungeon are this, for like three dungeons, and the Charr one in dungeons with lots of Charr. Making all dungeons Dwarf Territory was very annoying as its a fun way to play the game, but won't net you any faction points outside of quest rewards. Dancing Gnome 18:30, 5 September 2007 (UTC)

Could the effect of this be changed? As I previously wrote it only affects destroyers and they are only in (to my knowledge) Raven's Point, and some of the primary quests. This would be a lot more useful if it were to be against the stone summit, to help people in the Elite mission, besides stone summit appear all over the place. The health gain is small and it works the same as poison tip signet; only the first foe hit gets the life steal effect, so if you barrage 8 destroyers, only the first one will have its life stolen. Playing through the game the first time won't get you a high rank in this and chances are you won't play the primary quests more than once or twice so unless you are doing Glint's Challenge or Raven's Point this faction effect is largely useless to most people, which is a shame because Dwarven territory is where most people will be spending their time in GW:EN for the time being. Compare this with Rebel Yell which is a VASTLY more useful faction title bonus. Dancing Gnome 05:16, 13 September 2007 (UTC)

Monks don't benefit from this at all unless they smite, needs to be rethinked imo, at least some kinda defensive buff vs destroyers (like te lb vs demons or summthin) --The preceding unsigned comment was added by User:Primeval Sentinel (talk).

Makes a monks job a tiny bit easier though, with every skill used by his allies increasing their health, the monk doesn't need to heal quite as much. Monks don't get ripped, the effect just isn't directly useful. This isn't to say I don't agree, there should be a defensive bonus as well. (Decrease the variables, but make it whenever they deal or are dealt damage?) --Srakin 05:43, 26 January 2008 (UTC)

Monks do get ripped. Only if their OTHER party members have their rank high then they get the benefit. If the monks don't get anything from getting their Deldrimor rank higher then they get ripped, as simple as that. --The preceding unsigned comment was added by User:77.127.137.214 (talk).

perhaps make it a vampric mod cosidering your dealing extra dmg and gaining it as hp any way lol --The preceding unsigned comment was added by User:82.34.243.68 (talk).

It should include spells also even if it does not have any damage reduction. Kinda unfair for the casters as most of the melee will gain the most benifits out of this one. Renin 17:24, 2 December 2007 (UTC)

This does include spells, spells are skills. As long you as cast the spells on the destroyers anyway. -

Tried it last night and, even when i saw the healing effect (blue +11's flying over the screen while using some warrior or ursan skills) i never observed the respective 11 for damage (the yellow number). Does it works hidden, does it adds to the damage (as in +11 instead of "another 11"), bugged atm, or am i just blind?--Fighterdoken 22:10, 2 March 2008 (UTC)

I'm not sure if it inflicts health loss or not, but I've brought up the fact that it doesn't display health loss at User talk:Mike Zadorojny/Guild Wars Miscellaneous Bugs#Stout-Hearted health loss display bug. -- Gordon Ecker 08:12, 7 May 2008 (UTC)

I agree that it doesn't seem to have any effect at all. I've been testing on level 10 destroyers and have yet to see their health drop. --

Perhaps the last update fixed that, but the life stealing does appear now. I removed the bug warning as a consequence. --The preceding unsigned comment was added by User:Ayla (talk).

never seen a lvl 10 destroyer. However the title tracks seem to only work on lvl 20s and higher anyhow. Like rebel yell doesnt affect low lvl charr in ascalon but does work in HM--Justice 04:45, 4 December 2008 (UTC) 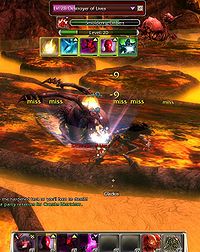 Uhm, yea, not effective but fun ^^

but these go to eleven