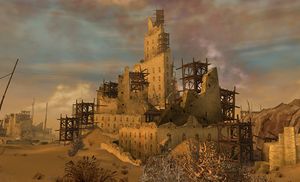 A ruined village of the Elonian colony.

The Crystal Desert Elonian colony was a nation founded by Turai Ossa and others from Elona as they traveled through the Crystal Desert in their attempt to Ascend during the Great Pilgrimage. When the Elonians reached the Crystal Desert, they waged war on the Forgotten, assuming them to be mindless beasts. Sometime after settling down and building structures, the inhabitants of Elonia attempted to build the Temple of Ascension, but the workers were slaughtered by the Forgotten. Eventually, the people grew suspicious of their neighbors and began to wage battles on each other, creating schism after schism.

Initially the people were split in two: those who moved to the region of Elona Reach, and those who moved to the region of the Arid Sea. Both of these groups had their own conflicts as well. Those in Elona Reach divided themselves between three groups, each having a single Vision Crystal and led by a ritual priest (Nahtem, Hehmnut, and Kahdat). Those who went into the Arid Sea had fought amongst themselves until one of them created the Ancient Weapon, which in turn destroyed their entire city and shook the land around it.

Now, all those who once lived in the colony are dead.