Players love new and special items, and we love including players in the creation of those items! We'd like to invite you to participate in our Guild Wars Design-A-Weapon Contest, where you have an opportunity to submit your vision of a cool new weapon and to possibly see it become a permanent part of Guild Wars.

We are looking for creative and appealing new designs for all sorts of weapons: swords, axes, bows, hammers, spears, rods, wands, scythes, staves, and daggers. Not to be forgotten are the shields and focus items that are also used in combat. You may draw your design inspiration from any of the regions: Tyria, Cantha, or Elona.

To enter the contest, simply send us a drawing, sketch, or printed image of an original new weapon, shield, or focus item and submit it to us for judging. The prize? Up to twenty of the best designs will be placed permanently into the Guild Wars world, and the designers of these weapons will win website recognition and Guild Wars goodies, too!

The Design-a-Weapon (2007) contest ran in the Spring of 2007 to design concept art for weapons that would be included in the release of Guild Wars Eye of the North. There were over one thousand entries with a hundred and seven winners, seventeen of which were implemented in-game. 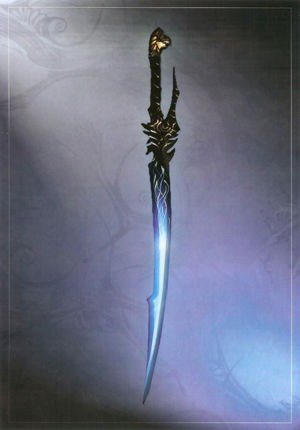 The concept for the Glacial Blade

1These three entries were similar enough to be combined as one design.