Sariss Yassith sends the hero out to locate and learn from Siliss Yassith, Sariss's broodmate. This is a useful step along the way to Ascension as it unlocks 15 extra Attribute Points for the character. 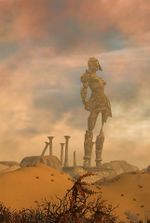 The statue as seen before it collapses.

The statue after it collapses.

A closer look at the head and arm after it collapsed.

After accepting the quest, head directly south to The Arid Sea exit from Skyward Reach. To find Siliss Yassith you must go to the platform East of where the indicator points and cross the bridge of rocks. Though the quest marker looks to be fairly obvious and easy to reach, Siliss Yassith's location is trickier to access than it may seem. Approaching the quest marker the player should notice a statue of a female warrior in the distance. This will collapse as the player draws nearer.

Upon reaching the mesa that Siliss is standing upon, head further south, around the mesa and up a small trail. From there the ruins of the statue actually form a bridge that can be used to reach Siliss. Then speak with him to receive the reward for the quest.

Sariss Yassith
"If you seek more wisdom to help you along the path to Ascension, seek out my broodmate Siliss Yassith in the Arid Sea. He can grant you special insight that will allow you to take better advantage of your own skills."

"Will you seek out this Forgotten knowledge?"

Decline: "I don't need your help."

Siliss Yassith
"I sense that you have come to me seeking Forgotten wisdom. Know then that we Forgotten were the first race to rule Tyria. During our reign, the world was at peace until your people came, until the humans came. We could not compete with the savage humans and were slowly driven into this desert where we met our future master, the great crystal dragon Glint. It is she who you must seek if you wish to Ascend. I sense a deep goodness within you and it would please me if you were to succeed in your quest. Allow me to unlock some of your inner potential."