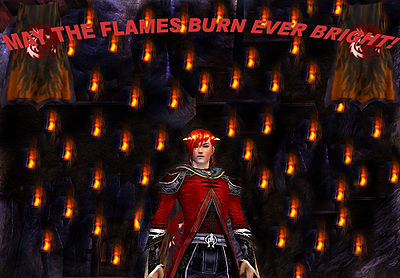 The Flames Of Rebellion is a Luxon guild. It was formed after the members defected from another guild. The guild focuses mostly on PvE. However, members often play PvP either by themselves, or together if enough members are online. All but two of the guild members were from the same previous guild, and all of them defected at the same time.

Two of the members were from a now-defunct guild located on the Isle of Meditation. They then helped to build their second guild on the Isle of the Dead. Now, the Flames of Rebellion reside on the Frozen Isle.

The former leader, Aka Ju, founded the guild. One of the members, Zealot V, created the slogan of the guild: "May the Flames burn ever bright!" After Aka Ju was unable to get on for about two months, Bhuddist Bob I was designated the leader of the guild by the Guild Wars servers. However, he gave the leadership position to Silver Tsumugari on February 7th, 2010.

Recently, Aka Ju left the guild, Hungry Mexican Kid was promoted, and the permanently inactive member was removed. We are currently looking into getting another alliance.

The Flames of Rebellion is currently a friends-only guild. However, should the guild accept any applications, the applicant will be left as a member untl further notice. They may also be asked for their character information, such as: highest leveled character, accessable campaigns, etc. Every member has at least one Level 20 character.

The guild is with the Luxons, so almost every weekend, several members will go into an Alliance Battle (AB) against the Kurzicks. When entering battle, Zealot V will often yell her battle cry (which is also the guild's slogan): "May the Flames burn ever bright!" Some members focus on mobbing the Kurzicks, while others focus on simply capturing as many control points as they can. Each member's choice of battle is as unique as their builds. The guild does not require applicants to use a specific profession, build, character type (RP or PvP), or play style in PvP.

The Flames of Rebellion is not currently recruiting. However, any applicants will be allowed in. However, they will remain as a "member" unless either: 1, they personally know a member of the guild; or 2, they do something to change the Leader's mind about their position.

To contact the Flames of Rebellion, please whisper any officer when in-game. Or, you may use Silver Tsumugari's Wiki talk page.

Also, please note: Silver Tsumugari will be online and will check his Wiki talk page as often as he can. Everyone else gets on only once or twice a week, if that.

The Flames Of Rebellion plans on being reborn into the world of Guild Wars 2.

The Flames of Rebellion guild hall is built on the Frozen Isle. Being a fairly new guild, it has very few NPC services in the guild hall. The guild intends to build the hall as money becomes available. 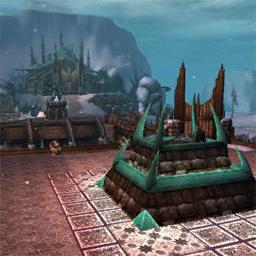 Please note: these stats are as of the afternoon of Monday, July 18th, 2011. They will be updated on the 1st of each month (or the soonest Silver Tsumugari can update the page).