Grenths Rejects was born on July 30, 2006, when Almighty Burritos and a few friends left the now-defunct guild, Among the Zaishens [AtZ]. They joined a couple alliances but these alliances were rather inactive and quiet. The guild then joined the Reigen Akki alliance and was there for about eight months, when the leadership shifted and GR took over. On September 23, the GR alliance experienced a remodeling due to the poor leadership of some guilds that had just departed due to the severe drama they instigated and is now a friendly environment where all can come and have fun, most importantly free of pettiness and drama.

Though large, our members are a rather tight-knit group. Many of the guild's members stay in contact with each other outside the game. Even the members who have moved on to other games are still considered part of the guild, and several speak to the active members on a regular basis.

Our guild believes that "age does not equal maturity." There are no age restrictions for joining the guild. Our members are of varying ages, ranging from about fourteen to about forty. The average age of the members is about 16-24. Though the guild is mostly American-based, we have members from Europe, Asia, and Australia as well.

Our officers work as a collective unit. Forums and meetings are used to keep all officers informed about important topics all the time. If one officer knows something, you can guarantee that the other officers do as well. New officers are nominated and chosen by the current staff. Members are also encouraged to submit nominations.

One thing that a person quickly notices about our guild is our cape. Or rather, the fact that it changes frequently. Every two weeks, a different officer designs a cape. Once a rotation of the officers is completed, we hold a cape contest where all the non-officer guildies are welcome to design a cape. The officers vote, and one or two are chosen to be displayed as our guild cape.

Grenths Rejects is, for the most part, a PvE-based guild. Many members are working on campaign completion, title hunting, or farming for armor/weapons/other goodies. However, several members enjoy Alliance Battles, Random Arenas, Team Arenas, and Heroes Ascent. We also hold the occasional GvG when there is interest shown. When we do activities as a guild, we do not restrict people by rank or experience. We allow every interested guildie to have a chance, no matter how much they have participated in the past.

We are now largely inactive, having moved on to other games.

Grenths Rejects is working on becoming a larger gaming community by expanding to other games. Several of our members play the game Last Chaos. We also have quite a few members who play together on Xbox Live.

The mission of this guild is to be established and known throughout the Guild Wars community. To do so, our goals consist of the following...

Members: We are accepting new members. If you think you are a good fit for our guild, please contact one of the officers listed below.

Guilds: We have room for one guild in our alliance. We are looking for a decent-sized, active, friendly Luxon guild to join the GR family. A PvE or PvX guild would be preferred. 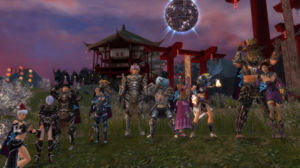