Assist Koris Deeprunner in his search for King Hundar's lost treasure in the Secret Lair of the Snowmen. 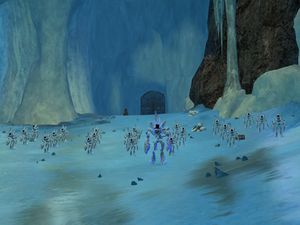 Upon entry, you can take the Dwarven Raider from the Beacon of Droknar. The destination is all the way South. You will encounter massive numbers of fragile Snowmens which pose little threat. There are Ice Darts and Ice Spouts spread through the area, avoid them as much as you can.

After a short walk insde, a Mischievous Snowman will send two Ice Boulders your way, dodge them or your party will be killed instantly. The Area Map can be found at the second Beacon of Droknar, but the quest is pretty straight forward and is not of much use.

At the third Beacon of Droknar, turn east to get the Dungeon Key which drops after defeating the Angry Snowman at the very back of that little room. Procede slowly in there, many Snowmen and Ice Darts stand inside. The darts will deactivate after killing the key holder. Unlock the Dungeon Gate and fight the group immediatly behind it.

Head east, and battle Freezie and its large Snowmen army. This boss will drop the Boss Key, which opens the door right behind. Enter this chamber to trigger the final dialogue which spawns the Chest of Wintersday Past to collect your rewards.

"According to the completed map, King Hundar's treasure lies not far from here. Incredible...all this time and I've been standing on top of a fortune beyond my wildest dreams! Are you ready to become wealthier than any god, <Player name>?"

Accept: "Hundar's treasure is as good as ours!"

Decline: "You go ahead and get buried in the cavern. In a thousand years even you may be worth something."

Ask: "You and your party will be transported deep in the caverns below to hunt for King Hundar's treasure. Are you ready?"

I was born ready.

Koris Deeprunner: "I feel the treasure calling to me!"

Glimmering Snowman: "They found our secret lair! Snowmen, to arms!"

Mischievous Snowman: "Those who leave muddy bootprints in these hallowed halls do not leave alive. They leave...on ice!"

Industrious Snowman: "None dare enter our secret ice lair! You shall meet the same frigid fate as the Dwarf King!"

Freezie: "This is a sacred and holy place. For your trespass you shall be punished with icy snowballs...of death! Right in the eye!"

"When we first found the ale I was skeptical, but when I think about how many thirsty Dwarves I know...well...I could turn a real profit with this find. "Deeprunner Brewery" has a nice ring to it, don't you think?"

Bug.Sometimes Koris Deeprunner will get stuck at a locked chest, making the quest impossible to complete.