Hahaha, what is this you speak? Lies you've told yourself, I assure you. Run along now, big people are talking. --J. Dublin--The preceding unsigned comment was added by User:75.74.114.132 .

so... who exactly posted all of the info for these skills? --Lou-Saydus

Dunno but I can confirm that the skill's description is exactly the same, i just got it. Gonna do some testing of what the "benefits" are. --Adul 21:12, 1 September 2007 (UTC)

Hmm so far I haven't encountered any benefits... however my character says idle quotes each time i kill while it's on me... these include: "You're no match for my brains!" "Knowledge is power!" "Kneel before your master!" "Mwahahah!" and things like that. ^^ --Adul 21:35, 1 September 2007 (UTC)

On GWO someone mentioned that supposedly one random effect is to recharge your skills. I have not had a chance to test it, or see if that effect is linked to one of the sayings. --Ravious 22:28, 1 September 2007 (UTC)

I added a table for the benfits and included an activation chance section as well, since i'd assume the more powerful ones are less common, although the percent chance will need testing to see if they actually vary. I don't have this skill available just yet, otherwise i'd do it myself. (The table could also probably use a better word for the name than "effect", but I hesitate on calling it a shout or anything of that sort). -- Txzeenath 04:52, 3 September 2007 (UTC)

I've been running with the skill and think you are probably right about some being less common than others. "Is There Anything I Can't Do?" seems quite rare, ""Buwahahaha!", "You're No Match for My Brains!" seem equally common. Unscientific guesstimating, of course. --Drekmonger 22:26, 4 September 2007 (UTC)

It should be noted that this skill does not activate as a stance does, you cannot used it when you are knocked down, using another skill, or moving. --Lou-Saydus

I've noted that as a bug instead. It says "skill" yet it acts as a spell... That shouldn't happen. FelixCarter

Does it work in dungeons other then CoF and Snowmen?

Its a PvE skill... It works anywhere in PvE. Justin6

Um. The correct grammar for that is heroes. and yeah way late reply to this but it'll work anywhere in PvE that you get exp. duh. personn5

I was doing a quick farming run at North Kryta Province in HM by farming the Tengu. When I killed one Tengu with the Scroll of Hero's Insight, I got around 504exp. When "Kneel before your master!" was triggered, I got around 588exp, so it does stack with insight scrolls despite the exp up get isn't much.--Dark Paladin X 02:19, 26 June 2008 (UTC)

This doesn't actually activate once per kill as the description claims. For example, if you kill five enemies at the very same moment, you will only benefit from one "shout" as opposed to 5 benefit "shouts."

Does anyone know the Tengu and other bird-man-things duplicate the "shouts" that a character under AoS uses? I'll test it later if I get a chance/remember to. Cedave 21:05, 5 August 2008 (UTC)

I want to hear some comments about using this in simple PvE. Grinding, questing, etc. This excludes farming. I was just looking at the skill today and looked at all the benefits:
Gain 5 energy: This one, might be helpful. But this zealous or energy management this might do little to nothing for you.
Healed for 50 health: I don't exactly see 50 points as "make or break".
Double XP gained: Really, how important is this at all?
Recharge all skills: I think along the lines of Melee classes, cooldowns are not that demanding so what use is having only 1-3 skills instantly recharge that were going to come back in a second anyway?
All conditions removed from self: Maybe good for condition areas (obviously), but what about the areas that aren't so much?
It's a neat skill but is it optimal for bringing in a normal PvE build?--

No. I saw it on an ele a long time ago and thought "hey, bringing this on a savannah heat build would be pretty cool to get around long recharges." Problem was, I only got the recharge like once every 10 minutes, which was really not worth it. The 5 energy was kind of a joke (eles have great emanagement as it is), the pitiful heal is only good for countering vamp weapons, and the extra exp gain... yeah. I stopped bringing it pretty quickly. It might be good on a warrior (lol), but for caster classes there are better options. -Auron 03:26, 23 October 2008 (UTC)

It's only a great skill for elite areas or just areas with many foes.. Urgoz Warren and The Deep for example. Otherwise i'd go for assasin's promise --

I use it for recharging skills with long recharge like Seed of Life, Aegis. Double xp is good for removing DP faster. 5 Energy is not bad, but recharging e-management skills helps more. Other bonuses are not that important. It's not elite like Assasin's Promise and can be kept constantly even with 0 asuran rank. Matek 13:35, 16 January 2009 (UTC)

This skill is even better than AP: can 't be removed, don't need a chosen target (ANY died foes in range will trigger it) can be constantly upkeep even at low Asrank and the recharge-skill condition is ~1 per fight (1 chance over 10foes) which is great.

I love this skill, atm I'm using it in my MQSC build (MoMe RoJ&Cry), it roxx. But yeah ofc preferably in areas/runs where a lot of foes die one by one. But that is exactly how our MQSC team build is built --

How do you think they became used or common across the world? Television.

I ran it in blackride Den (VQ)and the kills seemed to stream better there, it came out maybe roughly a little more than ten percent. When I went Skree farming in Vabbi however, I cleared over 120 of them and it only activated 3-4 times--perhaps that's still on track with the percent I dunno. In the Former I was with another player (duo) in the latter I was solo H/H. 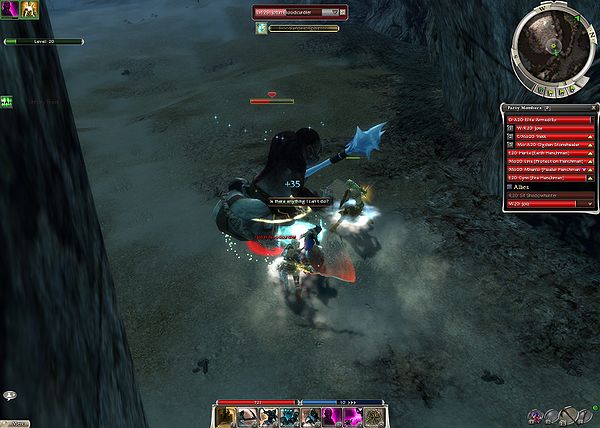 knowledge is power is a really really old expression. even older than the Animaniacs Roflmaomgz 00:26, 14 April 2010 (UTC)

I've seen two or three referring to 'unlike other skills with no activation times,...' but each seems to think it's the only one different from the rest. For now should we just collect them somewhere? Feral Aggression has no activation time but claims a pause. 98.111.220.242 04:13, 4 July 2010 (UTC)

This seems as good a place as any to gather them, then. When we have done so, we can write a note that will serve for all of them, and replace each one's superiority complex. Do you remember any others? I can't think of any with this specific syndrome off the top of my head. | 72

Asuran Scan also has no activation time but can't be activated during skills and has a pause. These three are Skills or Hexes with no cast time but aren't shouts or stances so I'm going to check the other ones of such that I know of and have unlocked (even if it isn't consistent, may as well check). 98.111.220.242 13:54, 19 July 2010 (UTC) (forgot to sign earlier)

Feel No Pain and Never Rampage Alone don't cause or require neither a pause nor aftercast delay. The same is true for both Riposte skills but that's more expectable. However, Inspirational Speech is listed as a Skill in the same situation as Air, Scan, and Aggression. The only other no-cast-time hexes are monster skills and there aren't any Enchantments with no cast time. What about Dolyak Signet or Signet of Mystic Speed? Can they be activated while moving? And I can't find a full list of non-enchantment non-hex spells that I can organize by casting time :/ 98.111.220.242 13:54, 19 July 2010 (UTC)

Tripleposting... but Activation time says that Dolyak Signet and Signet of Mystic Speed both seem to work the same as the other four--can't be activated when you couldn't cast a spell. 98.111.220.242 03:02, 21 July 2010 (UTC) (late sign, but at least I'm consistent)
Found another by chance: http://wiki.guildwars.com/wiki/Protector's_Defense

This is a line from the 1987 film Masters of the Universe, in the scene where Skeletor gains the power of the universe from through the Great Eye of Eternia. Yay, my first edit here. Added to main page. Daione 23:18, 7 July 2010 (UTC)

I've never really been fond of this skill, but found it to be a great asset for some of the new Winds of Change content, when you're up against huge groups, some of which do die easily. The recharge allows me to keep Endure Pain up throughout the battle, which really helps a lot. I assume it would be good for any class in a similar situation. Ifm2181 13:44, 10 July 2011 (UTC)