I am redirecting D'Alessio Seaboard (explorable area) here because this mission has no explorable area. Shard 05:28, 7 January 2008 (UTC)

Actually, we shouldn't even have the page at all, since it doesn't exist. -- ab.er.rant

For those tired of being overwhelm by waves of undeads during the battle to protect Confessor Dorian .

This makes the mission really much easier in Hard Mode and works perfectly well even with a level 17 heroe (Melonni).

It took me a while to learn how to do this with H&H in HM.[edit]

I did this mission in HM with H&H. i am a w/m. I found holy damage to be a great help here.

Me, w/mo soj(shield of judgement) and symbol of wrath. I couldnt control aggro around me, so cyclone axe and tripple chop wernt much use. any build would work good here as long as you have soj.I would cast soj on benji and confessor dorian when need be. I would also save soj incase a monk got into trouble.

mo/e healer. whatever you find to be a goood build. I use glyph of lesser energy, and i dont use more than 2 spells that cost 10+ energy. Otherwise your monk isnt energy efficent. i like woh(word of healing), heal other. I dont care for heal party or lod (light of deliverence)

If you are doing this in Hm, i assume that you know the route to the bonus. Dont take the urn, just open the gate and run down and kill the gouls that are attacking the white mantel. Confessor dorian can sit there and tank all day, dont be in a hurry. He can only die when you get close to him. I hear people say that they use a run skill to get to him faster.. dont bother, go as a group. Try to pin your heros around the healing fountain individualy, if they are grouped too close together, they will be more subjeptable to aoe. And kill the monks first, i leave the heros pinned in place, but set the monk as a target.

Clear the way to the bonus area where you have to deliver the urn, take heros back with you and re pin them at dorian, a gropu of 3 will attack dorian at this time. while your H&H attack and defend dorian, you can run go get the urn and by the time you get back to dorian, youll be ready to go back and get the bonus. --The preceding unsigned comment was added by User:Micro (talk).

There is no such mentioned bug as far as i am concerned, it "happened to me" but it was fixed when i cleared all the undead in the village --The preceding unsigned comment was added by 201.166.77.252 (talk).

I've never had that problem either (the 3 or 4 times I've played the mission). I'm removing it for now unless someone can confirms the bug exists despite clearing all the undead and saving Benji. -- ab.er.rant

If you finish the temple, go finish the bonus, and THEN explore... I'm not sure what triggered it, but Dorian started getting attacked while I was not near him, thus killing him and the mission failing.. Is this purposeful? Zooey 01:03, 22 July 2008 (UTC)

Yes, it is. There are a couple of undead groups that actually head towards Dorian after you are told to go get the scepter. Because of that, is adviced to first clear all the undead around him before going to do the bonus, exploring, or finishing the mission.--Fighterdoken 01:24, 22 July 2008 (UTC)

This just happened to me right now, I can't believe this =_= Finished the mission and all...my husby was standing next tot he npc and I went to go explore the mission just fails because Dorian dies. ☼ Kasei 20:15, 30 August 2009 (UTC)

Just my five cents: The group spawned 5 mins after defeating the last wave and consisted of 2 mesmers and one monk. The Mesmers can finish Dorian quickly with Ineptitude. Leaving one nuker behind was enough to deal with them. 84.171.160.61 01:32, 28 November 2010 (UTC)

I went to do the bonus with my monk and heroes but when I got to the first melandru offering (the one that you pick up) I couldn't interact with it. I simply couldn't pick it up. I clicked on it, I tried a lot, but no. did this happen to anyone else?--Devilsenvoy 21:25, 13 August 2008 (UTC)

I had the same problem just now, 12/28/2010. Could not pick up the Melandru's Offering. I'm not sure what the problem is. I can only guess it was because I was in candy corn form, but I think I've been able to hold items at other times while a candy corn. I was doing the mission with two people and four heroes.Miss Innocent 06:47, 28 December 2010 (UTC)

I started exploring the southern portion of the map and everyone in my party dropped dead immediately without reason. Why? --The preceding unsigned comment was added by 68.207.156.253 (talk).

There are three odd looking statues at the Temple of Tolerance, that look suspiciosly like they were made from Bloodstone, doen't it make sense that they would build their temple on top of a bloodstone, that when you were inducted into the White Mantle you were inducted ontop of a bloodstone? Isn't that kindof creepy? I think it is. Please give me your opinion on this theroy --The preceding unsigned comment was added by User:Necro Shea mo (talk).

I didn't think they were the bloodstone but definitely mursaat. Look a lot like the type of stuff you find in the Ring of Fire. Would make sense since the mursaat helped the White Mantle get rid of the Charr so they could have built them some stuff. Of course the White Mantle are rather vicious and creepy so could be :P --SunJinyu 18:05, 15 October 2009 (UTC)

Yeahh since they are areligious kind of organization and really crazy one is sure they built that to theyre "gods" i agree totally. Ivy Thunder Goddess 22 December 2009

It is not a Bloodstone, but simply some Mursaat structure. All Mursaat things look like that (purplish and glowing), go see the Ring of Fire islands for more beautiful mursaat structure. Reaper of Scythes**

Anyone else getting the problem in HM that Dorian's dying before you can get there, even at a straight run to him? i.e. ignoring the Ghouls and just running to him. Had this problem a couple of times now and it's somewhat frustrating. Amitiel 12:57, 27 December 2009 (UTC)

Yes in HM he tends to be under attack while outside of the mending fountain. However, a few times I've went in he never died before I got there. It could be noted that using a speed boost along with a healing skill may be needed to save him. With H/H you might need to put heroes and guard to ignore the other ghouls that spawn on your way to save him.--Underwood 19:39, 28 December 2009 (UTC)

Appears best bet is to park next to Dorian and kill all the HM patrols, or having a monk bond from behind the wall (harder in a party of 6 area). He died 3x today, once before we got to him, twice after we left him. I am SOO glad I had previously got this for Legendary Guardian that I no longer want to see this mission again. 173.17.187.115 08:53, 23 October 2011 (UTC)

Seems mostly luck to me as to what is attacking Dorian as your party approaches. Up to 7 approaches today, he died each time when we reached the bridge. Quite a good way of burning MSS. --The preceding unsigned comment was added by 81.141.153.139 (talk). 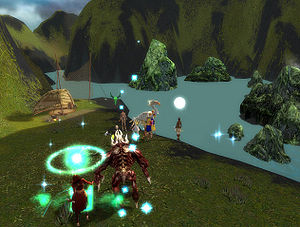 There's a (very old) texture bug in the water during the mission, at the waterfall near the bonus offering shrine. This has been around for years, I'm surprised it still hasn't been fixed. The water has a flat blueish colour. See image. Sjeng

The article says that bringing a minion master is advisable because the mending shrine will help keep the minions up longer, but the effect text for the shine says that it doesn't affect undead. Is this a glitch, and inconsistency between the description and effect, or has it been changed (in which case the note should be removed)? Bdeimen 19:25, 13 November 2010 (UTC)

My guess is because while minions are "technically" undead, they are summoned creatures as per the descriptoin. ®emi¢k§ 18:16, 3 February 2011 (UTC)

You can see minions are affected when you first enter the ring they get a halo like player characters and NPCs. --Melonhead901 07:56, 9 March 2012 (UTC)

I recommend using ebon escape.... If you can't quite get to Dorian in time you can warp (still MUST run the full length, use on bridge) and maybe aoe KD or blind til heros arrive. --The preceding unsigned comment was added by Event Nexus (talk) at 18:34, 18 May 2011 (UTC).