I'm confused. If the spell's damage is 56 at 12 fire magic, and all standard projectile spells like this one have a .75 second Aftercast delay, isn't it just assumed that the base DPS of this skill is (56/1.75) = 32? I'm okay with your numbers, I'm just wondering if it's worth bothering to list the DPS for every skill? (especially one so simple to calculate without a training dummy as this one is...) --Mystisteel 20:34, 14 October 2007 (UTC)

Right, but for what reason? As I've said in your analysis of MoR, it's quite pointless. Skills are either very easy to calculate, such as this one, or it's completely impossible to list all the right conditions for a spell to be of use (MoR, in which you listed how much damage it does against a single target). I'm not asking you what you're doing, I know that. I'm asking you why in the world are you doing it?

It's not that hard, just flare spam the master of damage at the isle of the nameless and he gives the stats, rouge did the same thing. Justing6 22:48, 23 February 2008 (UTC)

I think rogue is making a very good point actually.It shows how low youre damage output actually is when youre WASTING all youre energy on this skill.It needs a buff obviously Lilondra

And what if you shorten recharge time with spells? Does it go up, or down? /snarky | 72

If you can spam spells, I can deal more damage? Also, by your reasoning, numbers aren't needed for damage calculation, since "it's obvious they will die at some point anyway". I didn't say "ME DOES MORE DAMAGE HURR DURR", I specified the dps. Paddymew 16:55, 1 November 2009 (UTC)

I know this is incredibly pointless and has no practical use, but Elemental Attunement + Glyph of Elemental Power would boost Fire Magic to 20 and increase the DPS of flare to 45.7. With Fire Attunement and Aura of Restoration, you'll negate any energy loss. The drawbacks being that you've wasted your elite slot and some other slots and there are much better builds out there. Random Weird Guy 21:43, 7 January 2012 (UTC)

Am i the only one that's seeing a burning flying skull in this pic? —Zerpha

Let's have a look. 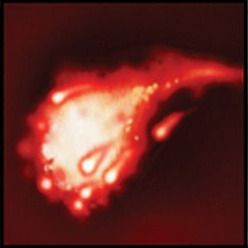 Sorry, I do not see it. - Vanguard

I see it, somewhat. its more looking downwards from my angle, but I see it. I think its just coincidence there.

I see Fire in that fireball Lilondra

Still not seeing it. Vili

"Combines well with Fire Attunement and Aura of Restoration. "

So would every other Fire Magic skill. It's not noteworthy enough to be honest. Using a fire magic skill with another skill that gives you energy for fire magic skill usage is like 1+1 = 2. It's nothing specific to this skill, or even a small group of skills. --

Or you could do something sensible like switch to Dervish and smack shit with your rape stick for twice the damage Flare does and also not run out of energy, plus you don't have to keep pressing a button over and over to do it. Bad combos don't need to be mentioned. --Jette

You mean like switching to a Dervish that is unblockable, unblindable and doesn't need speed boosts or snares to catch his target right? Of course a scythe does more damage, but that doesn't mean that spamming flare inbetween your big spells is automatically useless. 145.94.74.23 06:24, 12 June 2009 (UTC)

Actually, it does, because you dropped a good skill for a bad one. Vili 点

The actually good combo is Mind Blast, Immolate, Fire Attunement, Aura of Restoration. That being said, that is practically an entire build, so please shut up. Misery 06:49, 12 June 2009 (UTC)

If the best thing you can find to do is spam flare as an ele, you may wish to consider reading the guide on how to play. Oh, wait... that guide sucks. Brb, rewriting (tell no-one). And in regards to the comment about blindness and whatever, I was making a generalization. If you want to be immune to that shit, just run Rodgort's. --Jette

Did you know that by using Double Dragon and Glyph of Elemental Power, you could be spamming Flare at 20 Fire Magic for 80 damage every 1.75 seconds or so? That's incredible. Vili 点

Did you know that If I D-shot you once, you stand still for 20 seconds? ~Shard

Remember that AB where you, Swift and I kept taking turns d-shotting that guy's flare?--*Yasmin Parvaneh*

Flare does not need a rework. -~=Ϛρѧякγ

Agreed, it's just the cheap, spammable, low individual damage spell all of elementalist's magic schools have. Let it be that way --Lhoj 15:05, 4 August 2010 (UTC)
Give me a good reason why it should not. Koda

flare needs a major rework, look at skills like spirit boon strike, same damagebut actually has a secondary effect (heals spirits). Sure, it has a 3sec recharge, but its still spammable as hell and just means its slightly harder to dshot. Flare has no secondary effect and is in a line which contains skills that do far more damage/actually have synergy (ie immolate has burning).115.188.219.43 09:58, 3 September 2011 (UTC)

Spirit boon Strike is a ritualist skill, ritualists don't have access to the extra energy from energy storage so there is good reason an 5 energy rit skill deals more damage then a 5 energy ele skill. Please don't compare cows with horses. Flare is good as it is right now. Not all skills have to be uberskills. The game is already easy enough. Rumian 11:00, 3 September 2011 (UTC)

Flare is listed as being available from the four Hero Skill Trainers in GWEN: Gedrel of Ascalon, Kodan, Tyr the Skaald, Lexx. If you look at any of these individuals, they do not appear to offer Flare. I checked with one of my characters that does not yet have Flare and Gedrel does not offer it that character. Adeira Tasharo