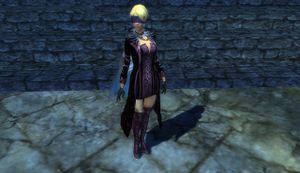 My favourate charracter, my mes:)

Animals, what a funny name to call your charracter right? Some people have asked me why I call my charracters Animals, well, it comes from when I first started playing the game. My first charracter wasn't an 'Animals' at all, it was infact called something like Benjius Emilius or something (I can't really remember). It was an elementalist. Now, I've never been that fond of elementalists, my favourate proffession now is mesmer, with close seconds with warrior and necromancer. So, I eventually got bored, and created a ranger. I was stumped for a name, until I thought I should call it something to do with Animals, rangers being close to animals and all that...so I called it Animals Life. The name 'Animals' slowly caught on, with people giving me the nickname 'Ani', so all my other charracters have been Animals since then (I deleted that elementalist...).

According to /age I've been playing for 59 months, so almost 5 years, at a total of 5,019 hours across all charracters. I loved Guild Wars since the moment I got it:). As I have been playing for such a very long time, I can't really remember much of what happened with past guilds and the sort. I mainly find PvE fun because of the Lore etc, but I do a little PvP, frequent AB and now and again I RA.

I am Leader of the Guild Order Of The Forgotten Truth [True] (page here [http://wiki.guildwars.com/wiki/Guild:Order_Of_The_Forgotten_Truth Guild Page). We've been going for quite some time now:). I wasn't always a guild leader though, I was an officer in GGoD Guild for quite some time before I left and created this guild. The guild has only recently rejoined GGoD Alliance. We don't have many members, due to RL issues with some of our officers/members. So currently we are looking for some more, though we don't like to concentrate only on recruiting, but having fun.