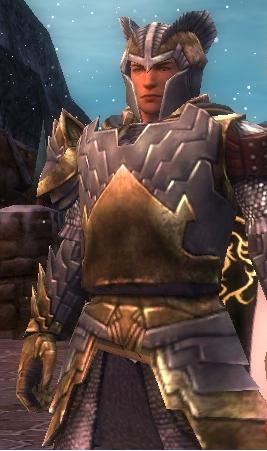 Hey everyone, you can call me Lloyd. I'm pretty much a casual guild wars player since I'm in college and is busy with classes and stuff. I bought Guild Wars Prophecies last year and is still having a good time playing it. I'm an active contributor in Guild Wars 2 Wiki(the suggestion page). I'm pretty old school with my inspirations, two of my first RPG games are Final Fantasy Tactics and Legend of the Dragoons. Since I am looking into a career in the video game industry, I often put suggestions for topics like professions. My two contributions were the hard hitting Lancer and the dark and mysterious Chaot Mage. I feel that I'm very passionate in this stuff and hopefully can find the career of my dreams as a game designer.

Of course, the Lancer and Chaot Mage aren't my only classes, I think I'll keep my best ones secret...I probably will make more classes for guild wars 2 professions discussion, but they will never be my best work. For obvious reasons.

Thanks for taking the time to read. :)

NEW---I just added a new class in the GW2 suggestions - professions page, it's called the Disciple, check it out!

Things that annoy me:

Lloyd the Marksman (R/N LV20): Born in Ascalon in a humble farming family, Lloyd, currently 19 years old, enjoys exploring and hunting with his pet, a Melandru Stalker. His keen eye and sharp aim let to the name Lloyd the Marksman given by his friends.

Saint Tirance (W/Mo LV20): Born as royalty, Saint Tirance's Uncle was Duke Barradin. He is skilled in the way of the sword since he began training ever since he was young. He is especially skillful in 1 on 1 duels. His mother thought that his birth must have been a miracle since a prophet said that he would die at childbirth. Which is why his mother always called him a Saint.

Felix the Archmage (E/Me LV20): Taught in the elite Nolani Academy in the arts of deadly Fire Magic. He was supposed to join the Flame Scepter Mages but bailed at the last second. Years later, he watches the Charr destroy much of his homeland. He set foot into unknown territories, hoping to gain greater power and skills along the way, determined that, once powerful enough, he will come back and seek vengeance against the Charr.

Nightblade Xaga (A/R LV20): A mercenary turned hero who fights to save Cantha from the ravaging plague. He used to travel with a tamed tiger to help him on his journey.

I do enjoy making userboxes :) Click on the link below to see the ones I made.[edit]