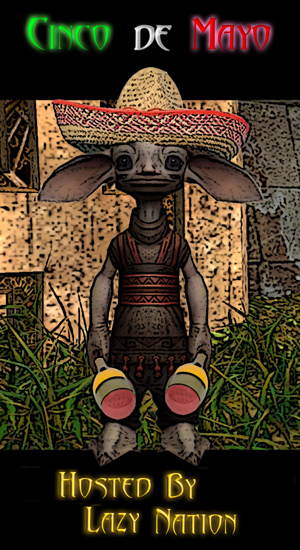 Cinco de Mayo 2008 Coordinated, Hosted, and Catered by: The Guilds of [LaZy Nation] 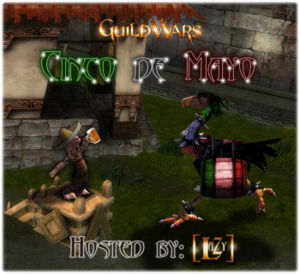 Spring: the year breathes anew with life, festivals and rejoicing of warm days and starry nights. So too comes the annual recognition of the most celebrated holiday in the Southern Hemisphere of the Americas; Cinco de Mayo – the officially recognized date of Mexican independence from French taxation of property in Mexico. Today Cinco de Mayo is date which is celebrated throughout the Americas with the abundance of poured spirits including beer, ale and most notably Tequila.

It is appropriate then that the holiday be adopted and celebrated in the Guild Wars community. The Guilds of [LaZy] Nation are proud to adopt the holiday and host the first Guild Wars global event to celebrate Cinco de Mayo for all those who hail from the lands of Tyria, Cantha and Elona. The pyramid ruins and land of the Asurans most closely match the mystic theme emboldened in historic civilizations from the Southern Americas; including the Aztecs, Incas and Mayans whose empires once bridged across the lands today known as Mexico.

So let the festivities begin and let the community prepare for The Nation of [LaZy] is about to unleash a festival for all to relish and celebrate in! Viva Cinco de Mayo!

Watch the Cinco Movie and Get Ready to Party![edit]

Ready to get in the partying mood? Check out our CINCO De MAYO 2008 Movie!

Cinco de Mayo is a date of great importance for the Mexican and Chicano communities. It marks the victory of the Mexican Army over the French at the Battle of Puebla. Although the Mexican army was eventually defeated, the "Batalla de Puebla" came to represent a symbol of Mexican unity and patriotism. With this victory, Mexico demonstrated to the world that Mexico and all of Latin America were willing to defend themselves against any foreign intervention. Especially those from imperialist states bent on world conquest. Cinco de Mayo's history has its roots in the French Occupation of Mexico. The French occupation took shape in the aftermath of the Mexican-American War of 1846-48. With this war, Mexico entered a period of national crisis during the 1850's. Years of not only fighting the Americans but also a Civil War, had left Mexico devastated and bankrupt. On July 17, 1861, President Benito Juarez issued a moratorium in which all foreign debt payments would be suspended for a brief period of two years, with the promise that after this period, payments would resume. The English, Spanish and French refused to allow president Juarez to do this, and instead decided to invade Mexico and get payments by whatever means necessary. The Spanish and English eventually withdrew, but the French refused to leave. Their intention was to create an Empire in Mexico under Napoleon III. Some have argued that the true French occupation was a response to growing American power and to the Monroe Doctrine (America for the Americans). Napoleon III believed that if the United States was allowed to prosper indiscriminately, it would eventually become a power in and of itself. (Source)

Cinco de Mayo is observed in locations around the world as a celebration of Mexican heritage and pride. For the most part the celebrations combine food, music and dancing. Cinco de Mayo is perhaps best recognized as a date to celebrate the culture and experiences for people of Mexican ancestry, much as St. Patrick's Day, Oktoberfest, and the Chinese New Year are used to celebrate those of Irish, German, and Chinese ancestry, respectively.

Come and join us as we celebrate the Cinco de Mayo Fiesta celebrating Family, Culture and Community!

LaZy's Senior Leadership will control the event. They will coordinate with staff via trade chat and ventrilo to keep the event running as smoothly as possible. Specific LaZy members act as leaders of the event, and are stationed in other districts.

The rules for Cinco de Mayo are as follows:

2). Use public chat for open discussion, but reserve trade chat for staff members of the event. I have no way of controlling this, but the event will be much more fun if you just keep trade chat for hosts and staff. It makes the event run much smoother, and things will get done faster, resulting in more prizes being given out.

3). Don't cheat. Cheating ruins the fun of the event, and if we find you doing this, we'll have to stop giving you ale and prizes. Play fair and earn your prize just like everyone else will hopefully be doing.

4). Get drunk and stay drunk. Cinco de Mayo is all about celebration , so CELEBRATE and have FUN!!

5). Have fun and create a positive, fun environment for those around you.

These come in 3 different categories:

A). Groupers (A three part question was asked consisting of NUMERICAL ONLY answers. Your answer must have been typed with ALL THREE numbers in the same line. [EXAMPLE: What is 2+2, 8+7, 4+4? Answer = 4, 15, 8] Let's see how you do when you are drunk!
B). Jeopardy A phrase is stated, and you must have answered in the form of a question. [EXAMPLE: Statement: "The endgame Boss of Nightfall." Answer= "Who is Abaddon?"] NOTE: You must have a question mark (?) at the end of your question based answer, and you must use correct English.

NOTE: You must have a question mark (?) at the end of your question based answer, and you must use correct English ((NOT What is Abaddon? WHO is Abaddon? is the correct form.))

This is a unique event that LaZy has run for it's guildmates before, and is now bringing to the entire Guild Wars community. The game basically goes like this: We will ask for a particular item (Examples: a stack of glittering dust, a mini Asura, or a req. 11 blue Spatha… literally anything in the game). If you have it, you will bring it to the person who asked for it, show it in trade, and win a prize. You keep your item(s) as well.

A.)Tonic Wars- We will ask for a certain tonic, and the first person to trade the specific tonic that we are asking for wins that round.)
B.) Title Wars- We will ask for a certain title and we will look around for titles and pick out the first 3 that has that title and those win for that round) we’ll have a few round of each of these Wars. Title Wars

Rather simple one, but highly effective contest. A specific title track will be called for. The highest ranked individual will receive a random prize. In the case of a tie, we will have a Rock, Paper, Scissors showdown.

We will Pick a number randomly lets see who’s the luckiest to hit a home run and guess the right number). There will be at least 5 winners each round of numbers

When its time for the costume contest We will Give you 15 minutes to come up with the most radical costume that you can come up with, We will have 5 Judges , We will decide on the following one. Coloration, 2. Uniqueness, 3. Inspiration, 4. Imaginative

We will have all of you line up on a line and the judges standing around on the sidelines. Ok the rules you can only move when Simon Say’s now you have to watch carefully there could be tricky Simon say’s * (example Simon says Jump everyone jump You win … everyone dance .. Everyone who danced Failed and is out if they did the action) J the first person to make it to Simon wins and we will have one, 2, 3, 4, 5 winners of each round.

If you would like to donate to Cinco de Mayo, we are happy to take any donations. You can do this by emailing us at: CincodeMayo@LaZyImperium.com or by contacting the LaZy Senior Leadership in game. Our in game names are: "Slayer Of Nemesis", "Smoking Pixie" and "Sheera X". Here is a list of the all the items that we are looking for and will be given out at Cinco de Mayo.

Note: All donations are for non-profit. No donations in any way, shape, or form will be used for personal gain in the game, and all items will be distributed to the guests of Cinco de Mayo in a fair manner, free of scamming, foul play, and cheating in general.

In just a few short days "The Guilds of [LaZy] Nation" will be hosting CINCO de MAYO 2008!, for the Guild Wars community.

We truly are excited to bring this event to the entire global community of Guild Wars. Things have been a little too quiet of late on the community front - so this is a great opportunity to kick the spring season into gear. Hosting global Guild Wars events is something we enjoy doing as a guild and CINCO de MAYO 2008 is no exception. We have been working hard behind the scenes in preparation for the event and hope that everyone will have an opportunity to stop by, drink a few ales, party and have a good time.

I've always contended that [LaZy] is a special place and unlike any other guild in the game; our members prove it to me each and every day. To me they are the most incredible player community in the game; a family who cares about each other, who cares about the global community at large and the tag and cape they wear every day. It is an honor and a privilege for me to serve along side them. Our members have worked hard to prepare for this event - and I invite you to come celebrate with them this Saturday, May 3 at 4pm EST in the International Districts of Rata Sum.

So I say onto the global community of Guild Wars "Viva Cinco de Mayo... let the festivities begin!" We hope to see you there.

Araliun Leader of the Guilds of [LaZy] Nation

About The Guilds of [LaZy] Nation[edit]

The Guilds of [LaZy] Nation is the BEST adult community-based alliance/guild in Guild Wars. The community consists of us Luxons, filled with 6 guilds and over 500 members. [LaZy] is a recognized GotW by ANET and has been featured by Beckett's MMORP Magazine and on AMD/ADI's worldwide website. In October of 2007 [LaZy] hosted the OKTOBERFEST community event which was a huge success with 4 districts filled with participants from all over the world. Members of the guild are dedicated to improving the overall Guild Wars community through active participation and hosting events. More information can be found about [LaZy] on our Wiki Page and at our website.