Escape from the Torment

Kaelen believes you are capable of finally freeing him and his fellow Orrians from the Realm of Torment, travel with his comrade Terick to search for a means of escape.

Start from the Gate of Secrets and meet Terick just outside the portal. After talking to Terick, your quest pointer will update and direct the party to a point due west of the Gate of Secrets. You will need to escort Terick along the way. Terick remains friendly, but does not join your party as an ally so he appears to be in no danger of attack from creatures along the way.

On reaching the quest point, Terick taunts the party about their impending death, and a group of Margonites spawn around the party, while Terick runs off to the south. Defeating the Margonites will complete this quest. Your character must live for the quest to be completed. If you cannot hold your own and survive, send your heroes in and direct their attacks from afar.

Kaelen
"Could you be the ones they speak of in whispers? They say since you've arrived, things have begun to change. My comrades and I have been stranded here since Orr was attacked by the Charr. How long has it been since then? No, don't tell me...I don't want to know."

"Terick is convinced that your presence will finally free us from this realm, but he needs your help. Will you meet with him."

Accept: "If there's a chance to escape this realm, then we must take it!"

Decline: "We're here for a purpose. And that purpose doesn't involve helping you."

Ask: "Terick spoke with great urgency when he mentioned his discovery. I am certain he is waiting for you outside."

Terick: "Are you the ones? Yes...yes, I can see it in your eyes. I felt a change in the air the moment you arrived. In a realm such as this, where every day is torture, it is easy to sense. You will be the key that opens the door to our freedom, our peace. Have not the people of Orr suffered enough? Let me show you, it lies just ahead...."

Terick: "I'd like to thank you for bringing me this far. I admit I was skeptical you would be so willingly led to your own deaths, but your generosity is your downfall. Your presence here is an affront to my lord, Abaddon! Just as simply as I used that foolish Vizier to wipe Orr from this world, I will use this vessel to eliminate you!"
Terick: "I leave you to savor your fate. Enjoy your last moments, fool. The next thing you feel will be insufferable pain. Think of it as my gift to you."

Kaelen
"I can't believe these things you've told me. I've seen men twisted by these lands, and it is true that Terick had been acting different as of late. But I can't believe he could be responsible for such an unspeakable crime. He was a good man. There must be something more to this." 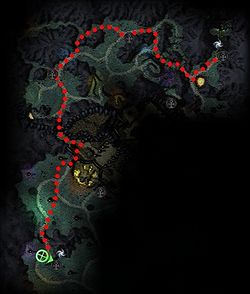 Doing All Alone in the Darkness at the same time.