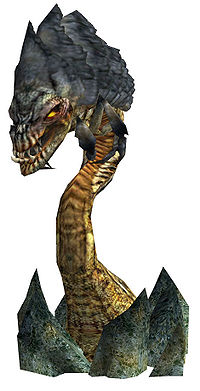 Behemoths are slender, serpentine creatures. In Tyria and the Mists, Behemoths are stationary, burrowing creatures that toss rocks at those who come nearby. In the Maguuma Jungle and Crystal Desert, they are often seen with burrowing insects. They are often camouflaged in with their surroundings.

In Elona, Behemoths are bipedaled, vaguely serpentine creatures. Small concentrations of them can be found throughout the Vabbi region.