"For Ascalon and Oink!"

The guild was founded on May 4th 2005 as a group of people who knew each other from outside the game, picking up people along the way. As for the Blackblade, no one actually knows anything about it, for its defenders protect it fiercely.

The small island in Fishermen's Haven in Tyria has been the home of DotB for a long time and a great number were recruited while just chatting there. When Factions was introduced, it was only logical that the alliance that was joined was made up with people who also occupied the island in question.

The guild has a home in the Wizard Isle guild hall, as it reminds them of the Pre-Searing Ascalon and their first impressions of the game. There are currently around active 60 members belonging to the DotB, who built on an ethos of teamwork and helping one another. Recently, they had the idea of starting their own wiki, which now counts over 300 articles.

Every Thursday, the guild organizes an event which ranges from playing Elite Missions to finishing Masters on missions. During Canthan New Year, many of their players set out to gather the ingredients for the feast in groups. Thanks to that, they were able to supply several districts with the needed ingredients and scored them many Oink miniatures in the process. They also had Rock-Paper-Scissors tournaments and quizzes, as well as a scavenger hunt and they hosted a Christmas party in their Guild Hall for the guild members and all their friends.

The guild even has its own comic and story that you can read on their wiki.

In may 2007 they were chosen for Guild of the Month

Rules to live by

Defenders of the Blackblade are going to be present in Guild Wars 2, and will uphold the same presence, principles and standards that have kept the guild going since its inception. 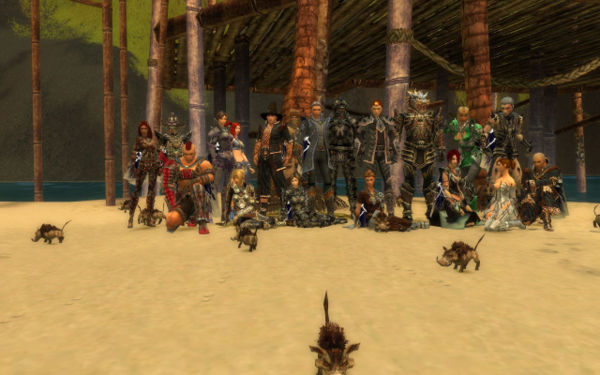