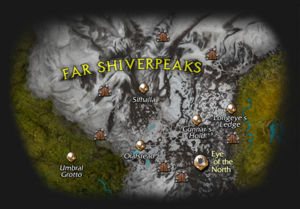 Map of the sneak peek area

Everything you acquire during the Sneak Peek Weekend, including items, XP, heroes, and loot, will be available to you when the game goes live on August 31 (assuming you have added an Eye of the North access key to your account).

To travel to the Far Shiverpeaks and access the Sneak Peek content, speak with one of the following NPCs:

The sneak peak will give players approximately 72 hours of play time.

Earthquakes strike Kaineng City, Kamadan and Lion's Arch at random intervals. The screen shakes 3-4 times and earthquake noises are heard. White Rats and Ooze escaped from the sewers of the cities and run around in panic.