Maybe lower the recharge or let it affect all party members/allies withing earshot to make it useful. Ninjas In The Sky 12:18, 18 February 2008 (UTC)

just makes it more fun for combos.... barbed arrows + poison tip signet + anthem of flame + anthem of weariness + this + Crippling Shot critical hitting..... lol not at all realistic, and would have to done with two people to be at all effective, but still 6 conditions with one shot is pretty impressive, add in a mesmer with fragility and not a bad spike. Barkingllama 07:56, 25 August 2008 (UTC)

Its unstoppable. Its the only thing sure enough to peg a deep wound without to wait a hell of a lot to try again. Before the 17 seconds are up, you will peg a Deep Wound, criticals are not that rare. Read where it say how to score a critical.--ShadowFog 13:23, 17 September 2008 (UTC)

DW is applied before the critical hit strikes, which means you don't need another skill/attack to properly apply the effects of the DW. --Treasure Boy

Nope. There are several other Shouts with the same duration. --Michael the Perfectionist

Should it end after one attack? Description suggests otherwise...--God

It ends after one attack, sadly. I was looking forward to +50 DPS. Vili 点

Yeah pretty much. They ought to remove the damage increase and make it party-wide so that the next attack skill used by each party member in earshot also causes Deep Wound. That would actually be useful. Green Arrow 13:17, 24 June 2009 (UTC)

Maybe someone should put Decapitate on the related skills as it has the same bonus dmg and the same DW duration? Oh and why do people think this skill sucks? Decapitate is an elite, 15s isn't very long to wait and u can open an attack with this as it uses energy not adrenaline. I'd say this is pretty kick arse no? Maybe I'm missing something... :S Combatter 18:20, 29 August 2009 (UTC)

How is "next time" not a good description? It obviously means ends after one attack, I don't see how anyone could get confused by that O.o ~

It still says "next attack," which still means it would end after one attack. Which it does. On another note, anyone notice that this + keen chop is the same as decapitate?

Why be limited to axe mastery? You can use this and Wild Blow with any (warrior or paragon) weapon and you've got an unblockable decapitate. You can even combine it with Irresistible Sweep on a Dervish for a pretty nice spike, albeit only on the main target HarunoMidori 09:57, 19 October 2009 (UTC)

will the + damage from this stack with the +damage of an attack skill?

On another note, does the damage from this apply to a skill like Whirlwind Attack (being such, effecting every target whirlwind attack effects)?--Neithan Diniem

Nope. just tried in a raptor farm and whirlwind only gave DW to the targeted raptor, not all who were hit by the attack. should a note be made of this? Ahskrenaim 19:55, 29 April 2010 (UTC)

Haha, So I spent the past week farming with this skill, thinking it was actually helping? Well at least now its just that much more clear what it does.--Neithan Diniem

late but no it's Istani 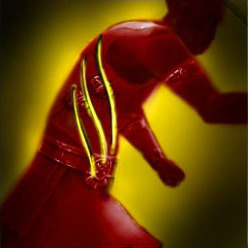 lol Holy you're an idiot, you should've said it's para istani --

It's like decapitate, only not elite, and doesn't cost you all energy and adrenaline. Lacks the critical hit part, but oh well, it's still one of the best spike skills ever. Throw it on your imbagon bar next to Swift Javelin, and bring Spear of Fury instead of the battle standard. This gives you a large spike and deep wound, and a condition to trigger the adrenaline effect of Spear of Fury, making your damage output higher, and you know a friend already brought the Standard, so it's a waste on your bar.72.161.126.63 01:04, 25 September 2010 (UTC)

Spike in PvE? Lol. Vicious Attack + Go for the Eyes! is much better recharge-wise, energy-wise and damage-wise if you have another martial class in your party for a full party spike. But yeah, FtW is OP hence why it doesn't give the ~+50 dmg in PvP. Ox rider 03:13, 31 October 2010 (UTC)