Just did this 3 times today for the Zquest. The mission always ended as soon as the lich went down. Once I even got the mission complete helmet in the middle of his resurrection animation (which then got cut short). Can others confirm that you only have to kill him once now? -- Hong 15:41, 31 January 2012 (UTC)

It was a long time ago last time I did this mission, but yes, I only had to kill him once. Did you guys do it in HM? ~Farlo

I think how many times you have to kill him is based on the location you kill him - closer to the center means fewer times. I recall that each time I do this I kill him a different number of times (always 1-3 times though). I only had to kill him once when he was dead center on the bloodstone, when he's outlaying I usually have to kill him up to 3 times. Konig/talk 21:39, 31 January 2012 (UTC)

I hate when he teleports out to the lava and then decides to drop dead from degen >.> ~Farlo

Killed Lich while he was standing on the edge of the bloodstone (not in the middle), caused him to resurrect + spawn 2 hand/fists (wasn't watching which they were tbh). Downed him the second time when I pulled him into the middle. -Chieftain Alex 17:57, 8 April 2013 (UTC)

2020, just did this mission for the 25-50th time, somewhere between that should be accurate, and got a bug.
The Lich kept respwning after killing him in the middle, 4 or 5 times (dead center) and also respwned after the final kill in the middle. It seems to me that he could have somehow been read as being in another spot by the game (but that is a guess), because an incremental change of his location (still always within the middle, not bb'd by anything, circle and on the triangle middle) made it possible to finish the mission (though as mentioned he did respwned as i got the completion). During this he once teleported me out in lawa and once spawned titans (might have killed him before he reached the mid first time). --The preceding unsigned comment was added by 78.73.31.212 (talk) at 02:04, 27 June 2020‎ (UTC).

From the section, "A Frigid Armor tank to draw damage away from the rest of the team." leaving me once again puzzled as to why players are required to play out of order to beat this mission. I commented elsewhere about this before and have nothing against using heroes from Nightfall and skills from Factions. It just seems to me the developers made something very unlikely to beat without owning the entire trilogy. I have completed this campaign once before but only with the assistance of a Dervish player from Nightfall. If you can beat this with henchmen, core skills, and Prophecies skills I am impressed. As for my current situation, I won't be able to use the "Frigid Armor Tank" but I am altering my hero builds to do cold damage with Water Trident. --Wendy Black 13:18, 8 April 2013 (UTC)

Still possible, /age = 31/32 min. I've gotta say that some of the local henchmen bars are awful for this mission (especially Aidan.. titans immune to burning gg, but Cynn with fire magic isn't great either... unless you bring Winter >_>. Probably if I'd brought Greater Conflagration too the henchies would have worked better) The sparks are OP vs proph henchmen, I think the warriors died twice each and most of the casters were sitting on about 15% DP after Price Rurik.
I admit the bonus probably requires a bit more thought, possibly something like healing breeze on the player character - the Seer burnt to death while I was standing in front of it with henchmen, they couldn't be bothered to heal it :/ -Chieftain Alex 14:44, 8 April 2013 (UTC)

I am still very impressed by your achievement. I am still juggling the elemental skills, I took Water Trident off Flint in Grenth's Footprint. I honestly haven't used water skills up to this point. So I am confused what the big difference is between, Shard Storm and Ice Spikes other than the energy cost. XD Either way, I will end up using my Heroes regardless. --Wendy Black 18:45, 8 April 2013 (UTC)

Could replace blurred vision with rez signet. Rust is super here because the warriors ball up and have rez signet, maelstrom might give you a chance vs sparks. -Chieftain Alex 18:56, 8 April 2013 (UTC)

Well I had been using this build but I might try your as well.

As you can tell I am using an E/R and I split my skills 11,10,10; Water Magic, Earth Magic, Beast Master. There is an elite skill called Ward Against Harm but since you cannot use two elite skills I chose its little brother. Well I am going to get in there now and see what damage I can do this time. --Wendy Black 07:47, 9 April 2013 (UTC) 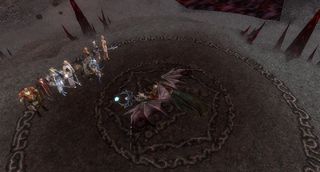 Ok I did it, with this build;

I did use the Faction elite skill Double Dragon, however I used only henchmen (all but Aidan) and took it nice and slow. Prior to every conflict I used Winter then cast my health boost. When sparks were in the mix I used my wolf Moon Rusher to pull them in one at a time. I did the same with Rurik, but the Undead Lich was no challenge at all. I got the Fire Staff at the end. --Wendy Black 07:01, 23 April 2013 (UTC)

Even after Rurik went down, I had to kill the Sparks with him in order for the cinematic to start, so the current description is not technically true. (It was kind of nice that the remaining Fists had disappeared after the cinematic ended, lol.) 24.47.80.100 19:38, 6 May 2013 (UTC)

This is similar to when you have to kill Markis's Jade Armor guards, Half of the jade armors dont spawn until he is killed. so im confused. Shadowskullex360 (talk) 23:59, 1 August 2013 (UTC)Shadowskullex360

Got it after a few tries[edit]

Skipping the Prince Rurik cinematic apparently puts your party in a much better spot, off to the side and away from any aggro.

As a newb GW1 player soloing as a W/Ra and with EotN heroes & henchies, I found this rather difficult. The Sparks were the key thing, and with NPC AI and my primary class, it seemed to come down to luck, along with standard GW1 strategy (go slowly, pull as little as possible, kite enemies into my stationary-flagged group).

I found it easiest to not always take the bonus route, but to just wait until those big pats move off and then slowly work down the main path.

I'm sure that with a different class (ele looks good) and/or human pals, this would be much easier. Overall, I'm glad I've completed it. :D

The drops in this mission can include non-Prophecies attributes and runes. Is this applicable anywhere else in the Prophecies campaign? If not, should there be a note of this? - Infinite - talk 23:35, 30 January 2014 (UTC)

Which runes? Based on Talk:Dead Staff#Spawning Power in proph?, it seems focus items, staves or wands that can drop in multiple campaigns (e.g. Dead Staff) can drop in Prophecies with a Ritualist attribute requirement. --Silver Edge 04:57, 31 January 2014 (UTC)

A Minor Channeling Ritualist rune, and a Raven Staff of Communing (tied to illusion damage, though). Despite having played for what, almost 9 years now, I had never seen this happen before. - Infinite - talk 13:50, 31 January 2014 (UTC)

What do you mean "tied to illusion damage"? This is the first time I've heard of anyone having a Ritualist rune drop in Prophecies. --Silver Edge 23:02, 31 January 2014 (UTC)