I just found one of these with the attribute spawning power from Zukra Cadava in the Divinity Coast mission NM, is this normal? C4K3

I confirm this, I got a req. 12 Spawning Power staff with Fire damage from Amir the Overripe in Nebo Terrace in HM. It's a situation like with a Shadow Staff with Rt attributes dropped in FoW, although FoW is counted a core area and has no Ritualist foes at all. --Slavic 14:36, 5 December 2009 (UTC)

Today a Q9 Air Magic inscribable dropped to a friend, but is not written in the page, so I guess it's wrong/missing. I edit the info and leave the picture for reference: https://i.imgur.com/WZmIM82.jpg (EDIT: okay, I don't know how to edit the panel with the attributes :v ) —Scribeton (talk) 02:19, 7 December 2020 (UTC)

What do you mean its hardcoded? If so what else uses that infobox because Ghostly Staff is similarly very wrong. Its available in almost every attrib, minus FC, heal, prot, resto from either z chest or terrorweb dryders in the one realm of torment area. I'm guessing dead staff is similar in reality. Discussion here https://guildwarslegacy.com/forum/thread/4633-pc-all-ghostly-staff-inscriptible-version-dom-illus-fire-curses-etc/ and https://guildwarslegacy.com/forum/thread/4636-ghostly-staff-insc-dom/Durp da durp (talk) 02:27, 8 December 2020 (UTC)

"What do you mean its hardcoded?" - the | attribute = option in the Weapon infobox template displays different things for specific values. setting that value to inscribable and uninscribable tells the template to use a specific pre-set value from this section for the Attribute requirement(s) section.
I'll look at the template and the Staff article (which appears to be correct) a bit more and correct it shortly. Since there's only a few pages that use it, hopefully it's a quick fix. horrible | contribs 16:37, 8 December 2020 (UTC)

Alright. Since inscribability is determined by which campaign the skin drops in, rather than the skins themselves, the Staff article is (at least partially) wrong too. Guess I should update that. horrible | contribs 17:03, 8 December 2020 (UTC)

There may be a couple of ones that truly are insc only, I'm not positive on that. The es, insp, sr may indeed not drop in prophecies because all other attribs were correct back then and those must have been added post nf release. Kinda like how nobody seems to have found a heal or prot ghostly anywhere, proph had df or smite staves, no heal or prot. Even os protective staves and healing staves (those names) were df for an attrib. FC is a maybe too since proph had near zero or maybe zero fc weapons. Also resto is a tossup since resto was removed from factions staves that dropped for multiple attrib sometime after factions release, it may apply to these too. I believe many of these staves have individual attrib tables for possible os/insc and not every attrib is available as both. Its one of those things that the easiest correct answer would have to come from anet, which I doubt would ever happen. Durp da durp (talk) 00:06, 9 December 2020 (UTC)

^^^^^ Horrible, i think this is correct only maybe plus restoration, but, idk for sure. Heal and prot never dropped on OS ones so i sorta doubt it now, resto is a toss up for previously stated reason of removed attrib from stuff in factions. Just for this staff and ghostly staff, not others too. I'm pretty positive these two staves have a attribute table not in the weapon infobox template. Durp da durp (talk) 02:24, 14 February 2021 (UTC)

why are you changing this? they all drop insc in eotn from undead and in nf from awakened. If anything only certain primary professions are insc only Durp da durp (talk) 19:24, 13 February 2021 (UTC)

Found Illusion, so it isn't just air for insc secondary attrib (this one was from a chest by awakened in poisoned outcrops) 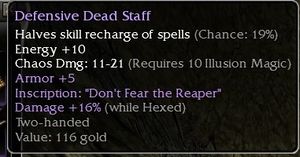