Travel to Scoundrel's Rise and investigate what is driving the Skales towards the Ascalon settlement. It turns out the Skales are not really fond of Undead neighbors. You will be fighting Skale and Gargoyles to get to the cause, then Undead once there. 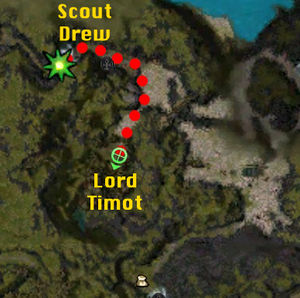 Map for the quest part starting in Scoundrel's Rise

Head east along the beach of North Kryta Province and enter Scoundrel's Rise. Just as you enter you will see Settlement Scout Drew (if he dies you cannot complete the quest until you zone somewhere, luckily he stands right next to a portal). He will point you in the direction of Lord Timot, a zombie boss who you must kill to complete the quest. Proceed east until you can travel south into a dead-end where the boss will be located. The route is guarded by 4 Executioners who may prove difficult to take down if faced all at once. Timot himself can be found at the bottom of the path together with some Smoke Phantoms. Once he is defeated, return to Captain Greywind for your reward.

If you have War in Kryta content active, Lord Timot will spawn close to Joh the Hostile and his group, who will fight and kill Lord Timot if he comes too close, rendering you unable to complete the quest until you zone. You are adviced to move to the area quickly to prevent this from happening.

Captain Greywind
"It has become clear that the skale are being driven from their swamps by some undead menace moving in from Scoundrel's Rise to the east. Rather than slaughter endless droves of the skale, who seem to breed as quickly as we slay them, I think it would be best to go to Scoundrel's Rise and find whatever necromantic force is driving these undead our way. Well, not merely to find it, but to put an end to it, right?"

Decline: "I'd rather keep fighting the Skale."

Ask: "Scoundrel's Rise lies east of here. The roads there might not be safe, but they should at least show you the way. Find whatever is driving the undead out of Scoundrel's Rise and destroy it!"

Settlement Scout Drew
"It's good to see Captain Greywind found someone able enough for the task. I'm quick on my feet and I can scout well enough, but battle's not my forte, if you know what I mean. Listen, though, last night I saw something that might aid you. There's some sort of zombie commander, Lord Timot, who seems to be gathering the undead and sending them west. If you can take him down, I think our problems will be solved."

Bug.Eventually, Timot will leave Scoundrel's Rise into Gates of Kryta making the quest impossible to finish in the current instance.
Retrieved from "https://wiki.guildwars.com/index.php?title=Reversing_the_Skales&oldid=2623900"
Categories:
Hidden category: