Dude, where is my first? -- NUKLEAR

...is Terms of Service, which is another legal document companies use. I think places like Neopets that are more 'just a webpage' tend to use ToS more, though some standard MMOs do too. Not sure if there's some leagle subtleties in the use of the names. --Star Weaver 23:05, 10 July 2008 (UTC)

thx for clearing that up, figures that a bottom of the barrel MMO like Neopets uses it--

(Reset indent) Don't get me wrong, I'm totally all for language change, but the reason "you've seen both used in that way" is because people use it incorrectly. The only correct form of what you're trying to say is, "In a similar vein". ☆ミ The more you know. Kokuou 02:51, 16 July 2008 (UTC)

He wants to be one, or at least that would be my observation. -- NUKLEAR

Nuclear is half right. I want to be one, but those "admin words" (if im reeading your question right) are things anyone can say. It takes an admin to block someone, but any user or ip can tell someone to stop and why.--

i appreciate it. Also, the f u statement was said because i misunderstood what you were telling me, and i am sorry.--

Back (for realz this time)[edit]

I am officially back to playing GW on a semi-normal basis. So uh, hi to all new wiki'ers and uh, old wiki'ers, post something on my page im lonely?--

Serious Question ( and i NEED an answer)[edit]

Because i am becoming an active gw'er, as well as an active wiki'er again, I wish to ask this question. I have looked over what they do, and what they are actually there for, and yes, I am talking about.....sysops (dun dun dun). You know, sysops, admins, etc. I'll get to the point, i wish to have another RfA. I am asking people to tell me whether or not they would vote for me, and, well, why. I wish to know any faults that i have with myself that i have yet to fix that could prevent me from being a good sysop. As well as any strengths i may have so that i remember to keep that...well...stregnth.--

Work on your typing. You appear more mature/experienced if you type more fluently. Poor capitalization and punctuation can give people second thoughts before they even get to see what you wrote. -Auron 12:56, 18 October 2008 (UTC)

Duley noted. I kind of wanted to just get that paragraph through before my internet crashes. It usually does every hour or so ><. --

Anyway....does anyone else have an answer to my question?--

I think that my main fault is my temper, hopefully lack thereof. There have been two times where it got the best of me (at least) in the past, and Brains helped me cool down by blocking me one of those times. But I think I have a better control over my temper now. Does anyone agree/disagree?--

point taken, but im talking more about before i left gw wiki for about a month. >.>--

I think I like my new signature. Though I'll probably get a new icon.-- 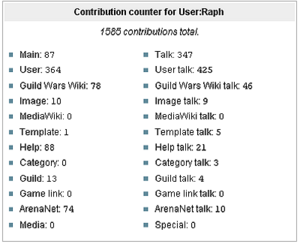 I get your point, but I have a feeling this time might be better, though last night I was kind of out of it, so ill think ill prolong this to sometime in november. Also, just to make sure I have the right idea, explain to me what your getting at--

I appreciate that, I liked it too. But I'm trying to go for a less flashy and bright signature. But i will probably switch between the two every now and then. So dont worry, you'll see 'ol blue 'n orange Raph Talky again at some point--

I think the pic is pretty cool looking, myself. All i did was take the icon for Aneurysm and invert the colors using paint.--

uh..ty? My reasoning for my sig change is for two reasons, 1. see above section on me and an RfA, and 2. I like to change my sig every now and then, so its not like this will be here for forever :P.--

Oh, but you better change it back to that dervy icon :o cause i love it -- Halogod35

i dont know how to creat a account can you tell me.

ty all very much! I wouldve responded sooner but i was in Minniapolis for the weekend. Happy Holidays!--

I just got on GW the other day, and apparently someone has decided to abuse my account and get it blocked. Thank you very much -_-...--