I've put up matching images of the emotes, in matching settings (in the boat at Hero's Ascent), with matching formatting. Hope it helps things look official =] The Ice Master 18:14, 29 March 2007 (EDT)

I dont see how i should @ a reply But i would like to see a more 3d angle of the emotes. Anet did a nice job making them look goed and you guys place a near 2d emote pictures. This is a kinda waste of the nice emotes.

(, it doesn't match the others i vote we change back to the other one. --The preceding unsigned comment was added by User:Detraya Fullvear .

i noticed someone had placed dragon (before it was changed back) as the emote for r15. is there proof of this in a pic anywhere? maybe during the ats testing? --Wongba 16:56, 4 May 2007 (EDT)

All rank 15 emotes in ATS testing showed the phoenix. So the rank 15 isn't implemented yet. --BigBlue

Please post a screenshot of this talk. Moreover I asked Gaile for a statement. --BigBlue

From what I know Gaile has spoken about it being implemented soon, but afaik never confirmed what it would be. I may have missed the log in question though. --Lemming64 12:21, 8 May 2007 (EDT)

I have never, ever said what the Rank 15 emote will be. Well, aside from repeating The Frog's absurd "notion" that it is going to be a Giant Gopher or Giant Gerbil or something of that sort. ;) I can assure you that I have never said what it would be in a serious vein, ever. --Gaile

I'm gonna laugh my ass off if the emote IS a bunny all that hard work for a Bunny xD -.- Tomoko 19px (talk)

I think it should be a ghostly.. like /rank Rwar I'm the ghostly kinda thing just jumps out at you

I hope it would be a dragon...I'm gonna check myself and let you guys know. MCPol

I hopes its a dragon that lifts you up in the air and you fly for 10 seconds.

I'm rooting for blanking out everything else in the instance, all except for the user's now anime-esque face, which is surrounded by shojo sparkles as a choir of angels blast trumpets. Then everyone bows down in awe, as the lights fade and the user dies. (the pretty ones always die at the end of the series, duh.) --

Sheer randomness = utter confusion FTW ;) - In all seriousness, a dragon would be interesting, but I think that it's a bit too expected. ~

Stephen Colbert would be the best.

I vote for a dragon that coils up around you then lifts you 2 times higher than the highest para emote, then bursts out in front of you similarly to the dragon firework in lord of the rings fellowship of the rings Words can heal 18:04, 28 April 2008 (UTC)

There a lot of things on this wiki that "don't serve any purpose whatsoever" to different segments of people actually. Sure, it's not useful, especially given the nature of the title and the accuracy of the formula at lower tiers. But since the wiki exists to document the game, I find it difficult to accept "it is useless" as a valid reason to delete something that's not misleading, not inapplicable, and not outright wrong. Move it to trivia if you want, as I see no reason to outright delete it, unless of course, you're of the opinion that all trivia should be deleted as well. -- ab.er.rant

There's a simple reason, Aberrant, the forumla is not accurate? If you look at the table, it predicts certain ranks dead on, and others, it does not. i.e. it's wrong. Why bother with it to begin with? This is a finite set of numbers. --Karlos 07:17, 29 May 2007 (UTC)

Yes, I know that the formula is inaccurate, which is why I suggested moving it to trivia. I wasn't the one who thought up that formula, but I think if someone took the trouble of doing that why shouldn't it be kept? We keep vague trivia references, so I'm thinking along the same lines of tolerance. -- ab.er.rant

We don't keep trivia references that are wrong, do we? So, if someone said that the seven NPCs in the quest x are named after the League of Extra Ordinary Gentlemen and only 3 of them had somewhat similar names, do we keep that note or remove it? I would remove it. --Karlos 22:20, 29 May 2007 (UTC)

I think that the R15 Emote should be Grenth and Dwanya coming out of the player and having a duel, it would be very cool

if someone was looking for the rank emote, and types emote they will be linked to the standard emote page. I think a disambiguous page might be needed. LeFick 17:10, 12 October 2007 (UTC)

/rank is listed on Emote, so I don't see the problem? If you search for emote I don't think you expect to end up on a page just about the rank emote. - anja

Where is the abmiguation? As with all emotes, /rank and /fame are listed under that page, and they are also listed at the bottom of this page. I've added a link to the description from the emote page to this one if that was your concern. --Thervold 17:19, 12 October 2007 (UTC)

That will do just fine. I had seen them myself in town, and didn't know much about them. When I came accross this page, I just though that there was a potential for confusion. I try to consider that what I might know or understand and take for granted, someone else is just learning for the first time. I write assembly manuals as part of my job, and you would be surprized at what can confuse some people. LeFick 19:36, 12 October 2007 (UTC)

Guess what that implies? -- ab.er.rant

Maybe it's supposed to be one of those messages I keep hearing on the radio "Want respect. Use a comdom"? MCPol

Anet please make 20 more double fame weekends so i can finally see rank 15 emote!!!! atleast show us some beta videos of previous work on it!!! please!

i hope it's nothing to make everyone all depressed, or a dragon that poops r8 eternal blades everywhere

why does he have to poop them??

My Thoughts On The Rank 15 Emote

I am thinking that if they ever do make a R15 emote, that it will be of Balthazar or some sort of deity (god).

Whatever it is, I hope that they make one. Although I am not sure whether they will or not because so far the highest emote is a Pheonix, and everyone knows that, according to legend, a pheonix cannot die, well, not permanently anyway. They just get reborn again. So it seems fitting that a pheonix may be the highest emote and that they will not bring out a R15 emote.

That's just my two cents worth.

It's a Spectral Hero. it's sure since few hours, the R15 as been reach by Leeloof.

Proof please, preferably in the form of pictures. -

Leeloof is the highest ranked player at the mo, fame wise, and I think hes broken the 90k fame barrier, so no one knows yet. -- Salome

Hmmm 7k away, thats not that far. So yay -- Salome

Wrong, Just asked today for Starcraft, he is 12k away from R15! I can give the screenshot away if needed.

Fifty-something wins, stopped counting at that point. Both iQ and Te did it. Bad guilds like GANK run stupid shit at like 3 am to win, but even they don't manage to hold that long. -Auron 12:33, 27 February 2008 (UTC)

This page has been temporarily protected

against edits by anon users due to repeated vandalism regarding what the r15 title emote will be. --Lemming

I've seen some charr use the tiger emote can we put it in notes or trivia or something after me or someone esle gets screen shot? king 14:34, 15 March 2008 (UTC)

For me some of the edit buttons in this article are not where they should be, does everyone have this or is it just me? Don't know how to fix it though so if someone can, please do. Screenshot Hakiki 08:53, 15 April 2008 (UTC)

It's caused by the images. No worries. It can't really be fixed unless you either remove the pictures or change your preferences to not have the edit links. -- ab.er.rant

IM SURE NONE OF YOU WILL BELIEVE ME BUT I SAW THIS GUY IN GUNNARS HOLD WITH IT AND IT LOOKS LIKE YOU ARE LVLING UP AGAIN AND AGAIN KIND OF LIKE THAT TORMENT SKILL BUT RAPIDLY pm me in game Devona Sakai --The preceding unsigned comment was added by User:90.206.182.47 (talk).

If you're already sure that none of us will believe you... -- ab.er.rant

And how do you know that?

I want Pegasus, like in the TriStar films. -- Salome

Is this a fake? 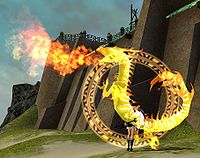 actually, any pic might be a fake, since expd users can just photoshop or anything it and make whatever they want ^^ this one looks quite authentic, though. - Y0_ich_halt

I thought Leeloof was closest? -- Salome

On top of all of that, we already know that the R15 emote will be a huge, dire and ferocious... RABID RABBIT!!! XDDD Mith

Last i heard starcraft was about 7k away from it, but that was a while ago--

I talked to starcraft yesterday. He has 86k fame. so got a while to go. thats like getting rank 11 again. Leeloof said he has 110,000 fame..but im sure hes lying

Starcraft has 13k left to get for rank 15. Spoke to him today and he very kindly updated me. :) -- Salome

It would be great if it were supported by a screenshot. Some of my friends had 40K+ fame when they quit playing and they played HA a lot and succesfully as well. (Ate of DK 14:25, 7 August 2008 (UTC)).

is it true that the frog has a similar emote, just with a rabbit instead of a different animal? - Y0_ich_halt

Well then you are misinformed. Starcraft is on every night in PvP. -- Salome