Each time I go out, and become a Junundu something odd happens... My Ogden, and Dunkoro both leave their wurm and die in the sulfer.. I really don't know if its a bug, and I dont know if it should go here. But it is really annoying/odd.--The Cyphero 21:59, 26 April 2008 (UTC)

Are You sure they got into Junundu at all?Sometimes an iritating thing happens-if dudes from your party are too far from the Wurm Spoor they can't get into a Junundu till You get out and in again :/ This forces You to leave the wurm and gather everybody near the spoor. --The preceding unsigned comment was added by User:Monolito (talk).

Which part of Joko's Domain do you see this? Right outside the Bone Palace? Near the paragon boss? It's most likely rocky ground since I have not seen heroes exit a wurm until I exit. -- ab.er.rant

This has happened for me too, my friends MoW and Livia have both done it. Right before a group of Crag's (4 of them), and mandragor pop ups, which wiped our team within seconds. This place needs nerfing. But of course this is never the place to talk to ANet staff, much like everywhere else. Lt Death 15:43, 14 December 2008 (UTC)

It doesn't need nerfing. It's just one of the most difficult areas to vanquish. Try other builds. -- ab.er.rant

This area is not hard at all. The only reason it's difficult is because heroes are fucking dumb with the worms. Everything that's a threat can be pulled to the worms and eaten. --Thc 04:54, 21 January 2009 (UTC)

You can't pull Shekoss the Stony. Also, saying that the area's not hard because you're relying on the wurm's firepower isn't exactly convincing. -- ab.er.rant

I've noticed that if you have a minion master in your group in any area in the Desolation, the MM will lag behind if there are any corpses to exploit, and any healers will lag behind while trying to heal minions. So, you have to make sure that all heroes catch up to you before trying to enter a Wurm Spoor...otherwise, they won't enter. And no, while this zone is frustrating in HM, it doesn't need nerfing. -- 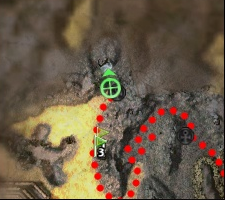 I have tested whether is possible to reach this area without Junundu wurms. It's possible, but very uneasy, much harder than route to Remains of Sahlahja. Need to run as close to a wall as possible, staying on the dark spots, which are free from Sulfurous Haze effect. If a wrong spot was selected, character dies in 3 seconds after appearing the icon, which often allows to move to nearby right spot. I have used 2 hero monks in head and tail of party line, they were able to revive other members (esp. henchmen who used to stay not very close to a party flag) and also each other, if need.

The main problem, however, was a group of Shambling Mesa and 3 Stone Shard Crags walking on the route, they are too far from the safe land (out of sulfur) and pull them was impossible. So I was forced to kill them in place, spending 3 runs from resurrection shrine. After that, a group of Awakened was not very dangerous because they can move out of aggro area and character is able to run to an exit without problems.

Running through the Shattered Ravines is much easier because no such powerful monsters around; it's possible to reach the Lair of the Forgotten in a few minutes and then explore the nearby areas from this outpost. --Slavic 17:57, 6 April 2009 (UTC)

Added: Eventually, I was able to explore most parts of all areas in Desolation, excluding the sulfurous areas and areas unavaliable because of lack of progress in storyline: Bone Palace, Ruins of Morah, The Mouth of Torment. I was also able to use a portal leading to Crystal Desert in Prophecies (unfortunately, only in one side). After exploration of areas in Vabbi and Desolation, my character achieved an Elonian Cartographer title (more precisely, 92.5%). The only requirement for this was a Moddok Crevice mission. --Slavic 04:04, 15 April 2009 (UTC)

Personally I think that statemet is greatly exaggerated, I've just finished vanquishing this with h/h in just a little over an hour and a half and I went to dinner somewhere halfway along, so if you ask me it doesn't take any longer to vanquish than any of the other areas. The number of creatures doesn't really have anything to do with it, it's mostly just large amounts of undead through which you steamroll with the wurms. Keneth 01:08, 7 August 2009 (UTC)

/agree did this with my friend with 2 RoJ monks with Judges insight, a frozen soil ranger, and discord heros. We finished in under an hour. It was ridiculously easy. I'm going to remove the note abot it being the "hardest" VQSome Ninja Dude 19:36, 12 March 2010 (UTC)

It can be an easy-ish area if you are prepared to deal with all the undead. However if you just go in there generic-way you are likely to find that the area is made of HATE. Took me some 3 hours and I don't want to ever see that place again - VileLasagna 13:33, 24 April 2010 (UTC)

After completing the battle part of the Halloween quest "Open the Flood Gates of Death", you get 6 Mad King's Guards that stay with you and respawn shortly afer they die, making this vanquish signicantly easier (8 junundu's + 6 necros). Be warned, they are MM's, so they steal corpses, and if you have a necro with Blood of the Master he may kill himself from the 20+ minions at times. The quest kills don't contribute towards the vanquisher kills. The 5 minutes it takes to complete the quest is well worth the time savings from the necros. If you have done this vanquish before (I hadn't and was doing cartographer)/experienced and are prepared, you could easily vanquish this area in less than 1 hour. During Halloween only.

I did it in about 2.5 hours on my ele, that's with crappy Invoke Lightning I was running to test it. The biggest issue I find is the Awakened mobs spamming 2 second resses with the Cavaliers "We Shall Return!" instead res, and then Cry of Frustration spam on top of that. Arneh the Vigorous is on my "I hate you" list. --Life Infusion «T» 01:17, 12 December 2010 (UTC)

was with henches + Panic+ Minion Bomber + SoS hero. Running caster heavy is a TERRIBLE idea with the choking gas and though leeches.--Life Infusion «T» 01:23, 12 December 2010 (UTC)

This area became noticeably less frustrating with 7 heroes; just did it in 1 1/2 hours with a generic team build and no Frozen Soil. The trick is to do as much as possible outside junundu, before getting into the wurms. You tend to rack up DP when you don't have your build to support you. -- Hong 17:44, 3 April 2011 (UTC)

~400 foes, ~ 1hr 30min, vanq/maping. Went with a full human team. FS is un-needed for a human team. H/H im betting the same. Just pressure the acolytes and cavaliers then clean up the rest. Be careful of the elementals here. Wurms take rediculous dmg from stone daggers and sandstorm. Kill these first always. REZ REZ REZ. We aggroed a huge mob of undead AND a huge mob of elementals and came out on top simply by rezing. If you need an indication of the challenge of this place, I took a survivor title track through here and came out with no deaths. Justice 22:06, 30 May 2011 (UTC)

Unless you were standing behind waiting for the other 7 to kill everything for you, there's no way you can do this without getting a single death, especially in the Junundu.

True, I avoided going in before our puller/tank. And when I was being targeted heavily I fell back to cast wail. I was in no way leeching the vanq as you are seeming to think. Basic PvE tactics ftw. Knowing how to use your wurm skills, beyond seige and auto attack with spear/flatbow, goes alot farther then you might think. Justice 03:43, 31 May 2011 (UTC)

When HM foes get the funny idea that they're going to win, a tactic that works for me is to force them to play on my terms, not theirs. :-) I just pretend that I'm in old-school Profecies and that it's 2006 again --- get agro, run backwards with foes in tow until they start turning away, kill the foe that came furthest, rinse and repeat. Almost any mobile group in GW can be killed that way, regardless of how large or powerful, with the exception of water eles like Rain of Terror that freeze you solid. If you combine old school tactics, 7 heroes and Pain Inverter, there's only one possible outcome. :-) :P Morgaine 18:27, 31 May 2011 (UTC)

guys ..... ur takin abt vanquisher? I dunno how to kill even the smallest sandstorm crag .... undead are another story .... I m an necro ele using a searing flames build ..... but dunno howto kill foes in joko's domain. --The preceding unsigned comment was added by User:Killer Phenom (talk).

If your primary profession is Necromancer, then you should use a Necromancer Elite Skill, not an Elementalist elite skill. If you want to use Elementalist Elite Skills, make an Elementalist. No offense, but you don't sound sufficiently experienced with the game to be vanquishing (or, going into HM at all, frankly).
Please end all of your messages on talk pages with ~~~~
Thanks!